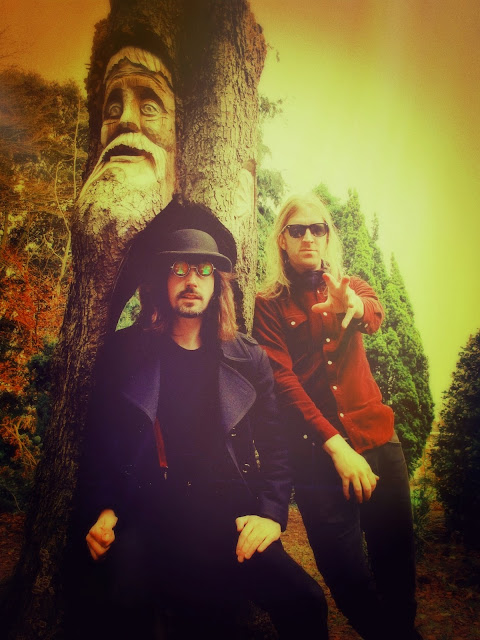 With Paul Molloy from Serpent Power.

What was the first record you bought?

I remember the first 3 bought around the same time when I was 9 or 10 years old. I bought the best of Chuck Berry. Canned Heat's greatest hits from Weston- Super-Mare after a day of climbing down caves with my mum, cousins and aunties and a best of Jackie Wilson called Reet Petite from a C.D market.

What was the last record you bought?
It was a while ago as I've been listening to Ian's and my girlfriend's collection the past year. I think it was Tago Mago by Can on vinyl.

What's one thing about you that very few people know?
I'm a double jointed ambidextrous amphibian and can wrap my legs around my head. I share my birthday with Roy Orbison and once headlocked Natasha Hamilton from Atomic Kitten in a nightclub!! ( Last 2 are true!!)

If you could record with any one artist who would it be and why?
Too hard to pick just one. It would be between Brian Wilson (Pet Sounds era), Phil Spector and Jack Nitzsche (in the studio together), Lee Hazlewood, John Barry to name only a few. All because of the brilliance and class of their records sonically and arrangements wise and the amazing performers and musicians featured on them.

Who should we be listening to right now?
Serpent Power!

Vinyl, CD, digital or cassette?
Vinyl is my favourite. Cassette tape sounds amazing though in a car and C.D's are great for convenience and I love reading the stories about the record and the credits. Digital is just shit as far as I'm concerned. How can you appreciate a great record that's been crafted with all the awareness of the spectrum of frequency and the wonderful sound of voices and instruments that should be played through marvellous stereo speakers and compare it to it coming through a little shitty speaker on a laptop? You can't. But it fits it in with today's ethos and majority of poor quality records that are made nowadays and the convenience for kids that have devalued the quality of music through this format of conformity. People don't buy records like they used to anymore they're too busy watching bullshit reality TV shows and taking photographs of themselves. People have dumbed themselves down beyond belief. The new fangled thing is not necessarily the best. Fuck the Joneses who wants to keep up with them anyway? They're dumbasses.

Tell us about your latest release.
Our latest release is actually our debut release. It is a 12 track eponymous record co written by Ian and myself. We sing all the songs, play all the instruments (except the brass on Killer Cherry Pie and Paul Duffy plays bass on a few tunes) and arranged it all. We had great fun recording it. It features many weird instruments and the subject matter is very fantastical. We have touched on many themes dealing in horror and sci-fi in which we are big enthusiasts. Ian designed the sleeve with his girlfriend Anna Benson. We made it with the greatest respect for art and strived to make a great record. We didn't make it to conform with any trend. In fact we did completely the opposite.

What's next for you, musically?
Start demoing next Serpent Power album.

What's for dinner?
For my dinner! Here's one for you foodies! Tonight for my banquet I will be having for Hors d'oeuvres pigs in a duvet, alphabetty spaghetti and crumbly down potato followed by canapes of spam and Ella down in one go, for the main macaroons marinated in marmite (didn't touch the sides!) Parboiled caramelised river cobbler and last but not least for desert, my favourite creme brulee sticky toffee tarmac!! YUMMY!!!!