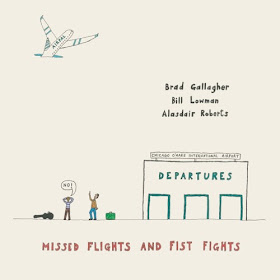 I'm sure that the majority of you are familiar with Bonnie Prince Billy endorsed Scottish / German folkie Alasdair Roberts, but what many may not realise is that his high profile Drag City released albums don't constitute his entire output. Roberts also self-releases a number of limited edition albums and EPs for sale via his website and live shows. And unlike the majority of artists who use these types of releases as a testing ground for stylistic detours, remixes, instrumentals, jams and other for-the-fans-only fare, Roberts' more low-key releases are very much interchangeable with his more widely distributed releases, in terms of both style and quality.

"Missed Flights and Fist Fights" is the most recent of these that I've been lucky enough to hear and it's a delight from start to finish - easily a match for any of his more celebrated releases. It's a collaborative release with Chicago-based multi-instrumentalists Brad Gallagher and Bill Lowman, who flesh out these arrangements with a diverse range of accompanying instruments that still leave the songs sounding spare and uncluttered, with the emphasis placed firmly on Roberts' compelling vocals.

As those who have ventured into Roberts' catalogue will no doubt have realised, he's not content to plough the same ground over and over, instead pushing folk forms in new and exciting directions, continuing the work of trailblazers from the previous generation (Nic Jones in particular comes to mind). While the impetus for this comes from Roberts himself, he accomplishes it by surrounding himself with an ever changing cast of sympathetic collaborators (check out "Hirta Songs" from a few years ago), and Gallagher and Lowman are certainly like-minded. Check out the arrangement on opener "Rocking The Cradle", with its skeletal electric guitar and bass nimbly courting atop an ever present jew's harp drone. Another old chestnut, "Lord Donegal" is given a fabulous overhaul too with a martial drumbeat and doomy fuzz guitars accentuating the pin-drop intimacy of the vocals. It's a spellbinding performance from all involved and goes straight into my top ten Roberts' recordings. "Sir Patrick Spens" and "When First I Came Unto This Country" are given similarly riveting readings.

And scattered amongst this often sombre fare are several songs that communicate to the listener a better sense of  the comradery and good spirits of the sessions. "The Riddle Song" (based on the Doc Watson version) is presented in a country-tinged arrangement which is charming, good humoured and relaxed, with a sprightly electric guitar accompaniment, while the closing duo of "Goin' Back" and "The Parting Glass" wrap things up in a bittersweet fashion.

If you're an Alasdair Roberts fan you need this, and if not already, this is a very fine place to start.