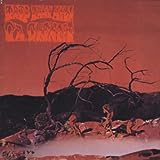 
Selling less than 1000 copies when initially released in 1969, Minnesota band the C.A Quintet's sole studio album is a good example of how much quality music was being recorded at this time, some of which we're only just uncovering now. Since being rediscovered and reissued in the early eighties, it's become a favourite among collectors of arcane U.S psychedelia, and with good reason.
One of the more consistent regional psych releases it includes at least three tracks which could have made an impression on the more adventurous singles chart of the time had they been able to find national distribution.
Smooth as Silk is a great psych single which sounds like a lost Syd Barrett era Floyd gem with a guitar solo that channels the Doors Robbie Krieger and a great harmony filled chorus hook.

Dr of Philosophy is more downbeat and starts out with mad scientist organ work and has a great martial horn part before more excellent Beatlesque chorus harmonies.
Sleepy Hollow Lane is another psych pop goodie with more spooky organ bits, an evocative trumpet break and some nice Jorma Kaukonen style guitar breaks.
At the other end of the spectrum is the nightmarishly paranoid Cold Spider and my favourite, the title suite. If you can imagine Pink Floyd's Atom Heart Mother suite if they'd had to cut costs when recording you've got a pretty good idea of what this sounds like, right down to the very Floydish basslines and choral work. Interestingly this was recorded well before Atom Heart Mother, and there's very little chance of the Floyd having ever heard this so this seems to just be a case of circumstantial synchronicity, rather than any direct influence.

The excellent Sundazed reissue comes loaded with heaps of bonus material. More commercially orientated, it doesn't match the quality of the original album but it's nice to have anyway.