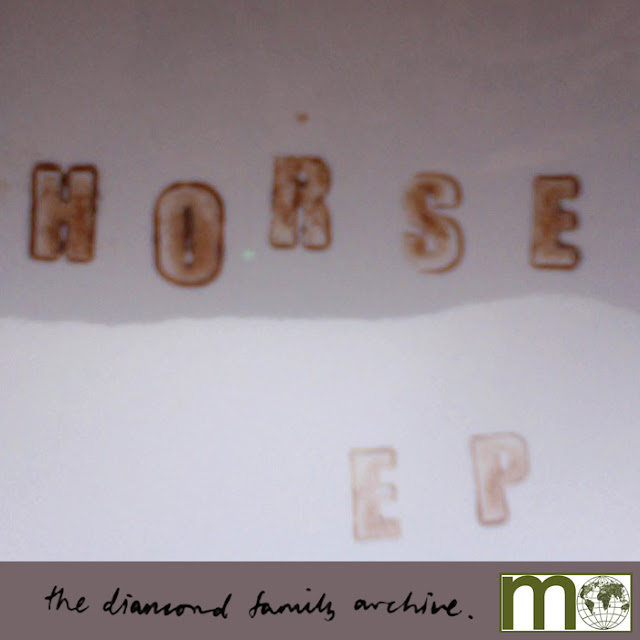 A cursory glance around the interweb will tell you very little about the Diamond Family Archive, save that they've released masses of material over the last five years and that you can get it all through bandcamp (here).
Further investigation reveals that the DFA, as I shall refer to them from now on, is the work of Laurence Collyer a British folkie, a self described recluse, and the owner of a magnificent beard.
Also magnificent is his recent "Horse" E.P, released in January and oft heard on my listening apparatus since.
Such is his prolific nature, that he's released another E.P since - he's literally releasing them more quickly than I can write about them. No matter.
This rapid fire release ethic belies the care that has gone into these recordings - these are loosely arranged but lushly recorded indie folk gems. As if the beard wasn't enough of a giveaway, Collyer is a member of the new school of British folk, and his material has more in common with the likes of Iron & Wine's Sam Beam or Bonnie Prince Billy than twee maidens and harvest times.
"Call In" is the perfect introduction to DFA's sound - a massed, repeated refrain with some exquisitely mournful trumpet accompaniment rubbing shoulders with delicately brushed drums, all played at a funereal, processional pace that suggests Sgt. Howie off to inadvertently meet his maker.
Now admittedly this won't be for everyone, and the pace doesn't change much as the E.P progresses, but those with a penchant for the mournful will find plenty to be enchanted by here, with atmosphere in spades and the same sort of desolate and beautiful melancholy at which the Dirty Three excel.
Much about the DFA remains mysterious - is this a collective (it certainly sounds like one), or the work of one man with a gift for numerous instruments and a love of overdubs?  Apparently it's the latter. Ultimately with songs like the gorgeous closer 'The Black Prince" at his disposal the who's and how's became unimportant to me, and the focus shifted to feeling fortunate to be one of the lucky few to actually be listening to this.
There's room for a few more of you too. Listen or buy through the widget below, check out the massive back catalogue on his bandcamp page, and if you're fortunate enough to be in the right place at the right time you can catch DFA live on tour in the U.K during April. Check dates here.