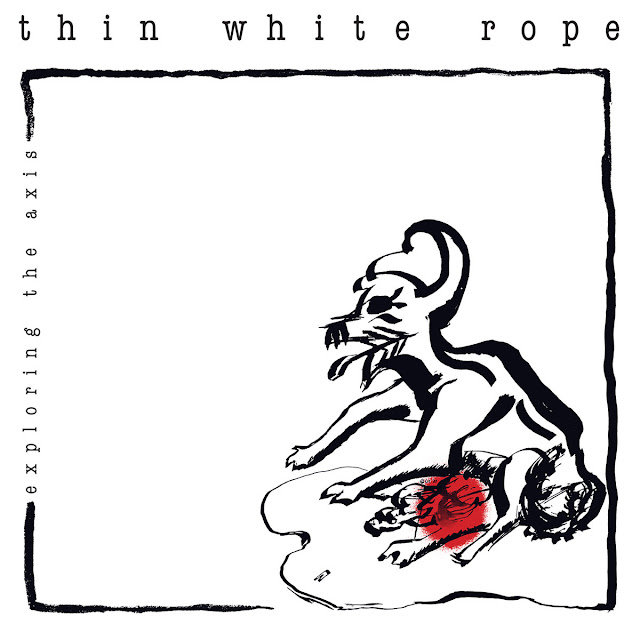 Tempus fugit. It seems scarcely credible to me that I first listened to Exploring The Axis by Davis, California guitar heroes Thin White Rope some 33 years ago. Now remastered by the good folks at Frontier Records and unleashed on limited vinyl runs, the first two Thin White Rope records emerge once more blinking into the light of a red sun reclaiming their rightful place at the very forefront of what we call great independent guitar music.

Context is a good thing. There are two main narratives that are generally considered when we examine California as a centrepoint for musical excellence. The first is the one that radiates in the sunlight and the surf and took the likes of Brian Wilson and Van Dyke Parks into the realms of odyssey - mythologizing a place of endless summer and good vibrations where fun,fun,fun can be had with reckless abandon. The second narrative is less settling and juxtaposes worldliness and black humour with emotional entropy and the mundanity of violence both real and imagined. This is the one picturing a Venice Beach with Jim Morrison lashed to the joists of Venice Pier, blood spewing from his mouth, of Arthur Lee alienated and sitting on the hillside watching all the people die, of punk rock disaffection with posters strewn at Johnny Mathis' Feet.

This dystopian California, of loathing and bittersweet wonder is the territory that Thin White Rope would pitch up in and proceed to rule for the best part of a decade. Their studies of personal dysfunction, mental illness, relationship breakdown, chemical hallucination and (barely suppressed) violence are shot through with some of the most original guitar playing you will ever hear anywhere. This marked them out from their sunny 'Paisley Underground' contemporaries like the black sheep of the family that they probably never belonged to in the first place. This was underground rock from the magma under the desert soil, claustrophobic and often dark. At times they resembled a desert baked Television, at others a peyote chewing Steely Dan but always and ultimately Thin White Rope transmitted their own new and thrilling musical language that once tuned into can never be vanquished.

Exploring The Axis, the bands 1985 debut, remains amongst the best debut LPs recorded and released in the 1980's. This probably shunts it comfortably into the best debut LPs ever recorded. The band's principle songwriter and dual lead guitar player Guy Kyser writing almost all of the songs with a keen eye for dissonant melody and in partnership with key ally, Roger Kunkel, probably the most consistently intelligent use of controlled feedback that I have ever heard. Opener 'Down in the Desert' is the story of the bands associate 'Karl' who drives into the desert one day and has a nervous breakdown, coming back to his friends profoundly changed but unable to tell them what happened or why. This narrative sits astride a melody and arrangement that I can only describe as a really rather pissed-off/sawn-off 'Alone Again Or'. As a first sonic signal to the wider world it was bold and new and brilliant. 'Disney Girl' is about as far away from The Beach Boys as you can get, its unsettling feedback drones and detached analytical vocal/lyric giving way to sumptuous guitar interplay and flagging another of their innovations - feedback as a swooping, swirling, background vocal - no one had pulled that before. 'Lithium' is the best song with that title from many contenders with its beautiful guitar interplay and feeling of high plains drifting - an essay in distance to borrow a phrase. Awesome. 'Dead Granma's On A Train' poses the question of what might happen if you soul mate's antecedents were killed generations before you came around. This is framed in what would become a classic 'Indie-Americana' arrangement with spangling country-fried guitars and a fiery Kyser vocal reminiscent of Johnny Cash at his most snotty. A gem. The title track closes the record and is just monolithic. It is to Exploring The Axis what 'The End' is to The Doors debut. A chilling tale of hallucination, madness and possible (imagined) murder wrapped in a melody and vocal performance that relentlessly stalks you and reels you in to it's utterly terrible climax. Its "Marquee Moon" meets The Shining. A ridiculously powerful closing statement and one that had me desperate waiting for the follow-up. 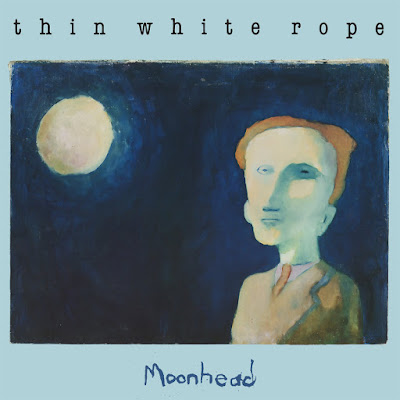 By 1987, the speed at which Thin White Rope were evolving into standard bearers at the vanguard of intelligent independent guitar music was becoming abundantly clear. If Exploring The Axis unveiled a Pandora's Box for our inspection then Moonhead not so much opened it as detonated it into a million tiny pieces. The music on this sophomore release is pulled deeper into the earth with terrible certainty, sulphuric and volcanic plumes of guitar ejecting across the night sky. The performances captured here crackle and smoulder with an incandescent and dazzling fury .

Opener 'It's Not Your Fault' looms into view on a truly gargantuan and twisted feedback laden guitar riff, its accompanying narrative setting the tone for the remainder of the record with its feelings of guilt, disappointment, bemusement and fatalism. The ante is upped further on the following detonation of 'Wire Animals'. This is a conflagration posing as a primitive hoedown that scorches your ears and blows your head off before those amazing twin guitars relent, squalling to a molten finale. In my humble opinion it is as good a song as you will hear. Ever. 'Thing' on one level is incongruous and perverse with its simple acoustic guitar and brief, tender vocal disarming you but ultimately it's still a song about disappointment and unresolved feelings. The titular 'Moonhead' is spectacular - a beautiful construction that builds on silvery guitar lines before pulling back the covers to expose a terrible secret. 'Wet Heart' is a dilemma, surgically removed from its author on twin incisions of feedback guitar. 'Come Around' provides an almost light relief with it's conversational, bar-room tone and lightly skipping Nashville beat. This is soon discarded 'If Those Tears' is as dark as a Mojave midnight, swinging and dangling shards of guitar that endlessly criss-cross over an intensely delivered vocal focused on betrayal. 'Crawl Piss Freeze' closes the set - a grindingly abstract Lynchian prose piece that leaves the listener stranded by the side of the highway in the starry silence of the night as the tail lights of the battered pick up truck you were hitching a ride in fades away. Moonhead has changed you but like most of the protagonists in its collection of songs you aren't completely sure how or why.

And there we leave the story for now. Two crucial outings from the 1980's that defined much of what would follow have been cleaned up and sent back into battle. Exploring The Axis and Moonhead are available directly from the label here or from selected stockists around the globe. It's worth noting that the label is selling some super limited vinyl variants (150 of each on vinyl) so if that floats your boat go straight to the source. 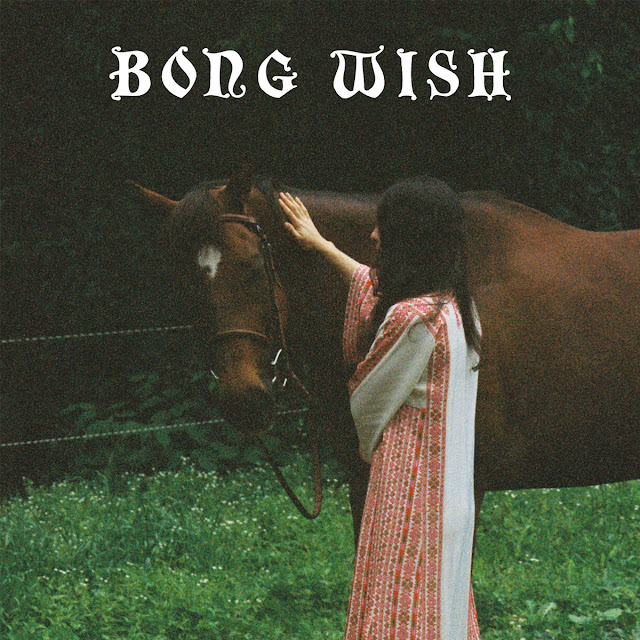