Lords of Thyme "Proud Maisre / If I Was A Bird" 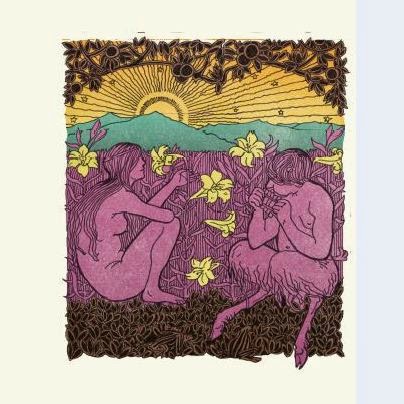 When weirdo Wicker folk proggers Circulus quietly folded Joe Woolley, Tali Trow and Pat Kenneally decided to keep the homefires burning under the name Lords of Thyme and their first single sifts out  the proggier wyrd elements that Circulus were infamous for and in the process they've created what is quite probably the best thing that any of the three have put their name to at this point.
Add the fabulous vocals of Michelle Griffiths and you're on to a winner.

Much has already been made of The Lords of Thyme's aural similarities to Pentangle, and on the evidence of A-side "Proud Maisre" I can't fault that argument - from the supple, circular acoustic guitar figures to the swinging double bass and percussion, this is very much in the style of and indeed in the same leagues as those particular giants. The marvelous arrangement only accounts for part of the considerable appeal here though, it's the conviction with which Woolley and Griffiths deliver their vocal parts that really sells it.

B-side "If I Was a Bird" is less overtly folky, in an easy going troubadour style that fans of early John Martyn won't find displeasing. Of the two tracks on offer here this one is almost certainly the more easy to sell to a contemporary audience. Indeed my partner (who is liable to run screaming from anything with the barest hint of 'warble') notedly pricked up her ears and was heard to remark "This is nice" - and she couldn't be more right, this is very nice indeed and makes me hunger for a full album.

Available on 7" from Sunstone Records - order direct from the label here.