The Steppes - Drop of the Creature 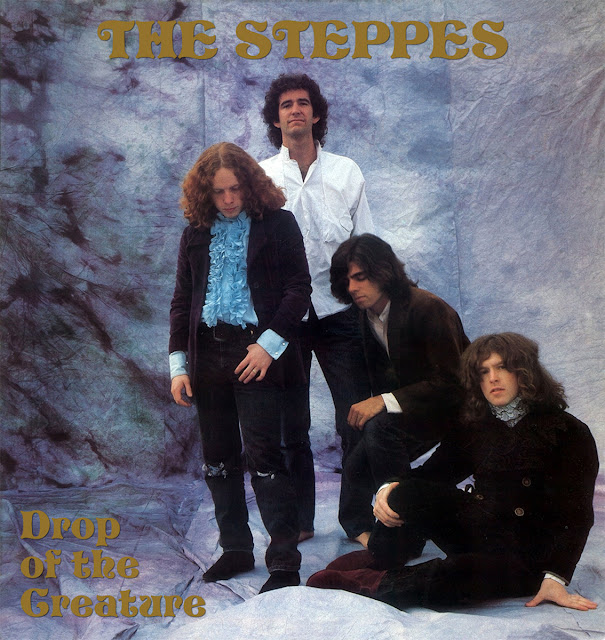 Wow! Someone finally remastered and reissued this monster on vinyl...

It was 30 years ago today…well it was about 30 years ago today that I first heard the then new debut full length LP by The Steppes, “Drop of the Creature” released on Greg Shaw's legendary Voxx Records. In 1986 this record stood pretty much alone as a perfect example of modern psych-rock-folk. Whilst many of the groups of the decade who had hinted at taking the magic swirling ship downed tools, signed to majors and retreated into distinctly un-psychedelic AOR rock land, The Steppes were heading outwards into the purple mist.

The band didn't so much buck the general trend as obliterate it, unleashing one of the great psychedelic rock records of all time (in my humble opinion) with the masterful ‘Drop of the Creature’. This is a record loaded with wonderfully constructed songs supplied by California residing, Irish-American brothers John and David Fallon. It is psychedelic for sure, it is also folky and prog and rock and beat and avant garde - all at once. This was musical. It displays myriad influences - from the 60's and 70's, from Europe, from America and time has shown it was clearly years ahead of its time. This was musical alchemy par excellence and nearly all selections contained therein are underpinned by a mysterious, almost religious, celtic flavour that often adds an epic drama and romance to their strangely strange but oddly accessible sound.

“A Play on Wordsworth” opens proceedings, appearing on the horizon with a slightly ominous and unsettling barrage of slashing power chords and impressionistic utterings counterpointed by several cluster bombs of wah-wah driven guitar breaks. It’s quiet-loud changing up through the (Disraeli) gears and use of light and shade immediately marking this out as a very different beast from their ‘Paisley Underground’ contemporaries. What we have here is no overly stylised slavish retro-trip; this is a musical tour de force, dripping and pulsing with invention and ambition - as an opening gambit you know you are in heavy territory.

‘Somebody Waits’ is a sublimely beautiful acid-folk ballad that could melt the hardest of hearts, a postcard from home to a distant and ancient traveller who is searching for something that is already there. Its plaintive closing advice of "don’t you dare drown in the spring", remains as profoundly affecting to me now as it did on first listen all that time ago. ‘Holding Up Well’ is muscular and driven by a powerful 70’s prog arrangement and wonderfully dramatic vocal performance. 'Make Us Bleed' is daringly deft - all scrolling guitar runs and alternately biting and lyrical vocals that seem to simultaneously invoke the spirit of Phil Lynott and John Lennon - go figure. ‘Cut in Two’ is detached with an almost diffident delivery, replete with slide guitar buried in the mix of a soft shoe shuffle. It’s jolting endgame is impressive and sounds nothing less than an asylum door being slammed firmly shut. 'The Sky is Falling’ manages to combine that celtic lilt with some truly heavy psych moves and appropriate use of slide as a way of knocking the listener off balance. “See You Around” is as close as The Steppes got to their immediate peers, a slab of straight ahead sunshine pop that seems to fluctuate between The Byrds of ‘I See You’ and The Beatles of ‘Drive My Car’. It’s a beauty and should have been the song that launched them out of the underground and into the daylight. 'Lazy Ol' Son' is a bar room argument between Syd Barrett and Rory Gallagher with no clear winner emerging from the ensuing spat. 'Bigger Than Life' is a total trip. All see-sawing echoed bass stabs, ultra-compressed "Lucy in the Sky..." vocalising, amazing squalling shards of backwards guitar and watery drums. Its a bit like "The Man Who Sold the World" era Bowie and its utterly magnificent.

'Black Forest Friday' is a short piece of sonic grand guignol, its queasy keys, snaking guitars, end of the hallway flutes and mechanical sounds making it one and a half minutes of totally spooked out baroque madness. ‘More Than This’ closes out the album proper with a lingering sigh and some suitably wise words that still resonate as one expects they will forever, “there is no chosen holy land...I wish today was like tomorrow, I’d pack up my bags and all my sorrow..” – all set inside some lovely guitar phrasing and a closing Page-esque guitar solo that arcs upwards towards the sun before fading in its golden light. Add in the beautifully kaleidoscopic 'History Hates No Man' as one of the bonus tracks with its fabulous melange of floating guitars, chimes and mantra-like voices singing hosannas from the highest hilltops and you really are being spoiled here. This is fabulous stuff.

Thirty years later, time remains hugely kind to the ambition, vision and uniqueness of this record. It's ability to startle, unsettle and beguile the active listener with its magick remains undiminished, its stock continues to appreciate. 'Drop of the Creature' is simply a fabulous achievement. Believe.

Available from limited stockists and the label direct below.