The Hardy Tree - Through Passages Of Time 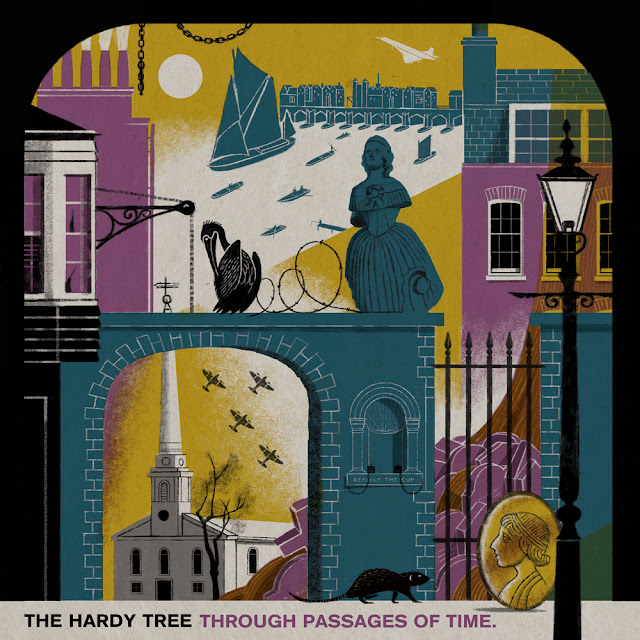 Winter is drawing ever closer up here in the northern hemisphere and, as I take in the last of the late autumn light and stare blankly out of my north London window, I am being gently drawn into a brave old/new world by the never less than great Clay Pipe Records. This latest release is a singular piece of work, as the deeply beguiling music and accompanying striking art work is the creative outpouring of label supremo and polymath, Frances Castle, operating once more under the moniker of The Hardy Tree.

The beautiful floating soundscapes/sonic friezes found here are dreamily delivered in gently flickering, devotional vignettes that envelop and involve the listener with a warmth of spirit rarely found in such keenly conceptualised work. Every note is drawn out to maximise its lingering pictorial impact as time is stretched and manipulated with sound. As a whole work, "Through Passages Of Time" creates a blurring almost disorientating intimacy that is almost impossible to disengage from. Even if you wanted to.

The opening and instructively titled "Looking Down on London" sets the tone with its simple, almost musical box like structures, creating a lovely minor-key ballad with very effective use of vibes and mellotron. "The Peerless Pool" lopes ever so gently along with vintage synth washes and a mood that wouldn't be out of place on the best of the Ghost Box catalogue. "St John Horsleydown" and "Newport Market" echo with ghostly voices, underpinned once more by the most delicate of musical figures whilst "Baltic Wharf" groans with the sound of straining timbers in the tidal Thames before settling into the stateliest shanty I think I have ever heard. The latter benefits hugely from some lovely mournful viola playing by Left Outsides crew member and Plinth collaborator, Alison Cotton. 'Sluice House Tavern' is a lovely sonic tapestry; a beam of autumnal afternoon light through a lead-glass window, generating a hugely resplendent ambience for the listener. 'Near Windmill Bridge' is all analogue synth twists and gently soaring keys with a whispering drum machine in the background. "Cut Throat Lane" brings matters to a soul soothing end, a series of spirit voices ascending ever skyward on an endless journey back into the afterlife and on to who knows where.

On an instant level, "Through Passages Of Time" works as a highly accomplished musical travelogue, using a historical overview of a London lost to the diggers and the tower cranes as its guiding star and central concept. However, the longer you let these meditations seep into your being and colour your minds eye, the more you realise that what you are experiencing has far more depth and complexity. This record is more like a carefully constructed requiem for London featuring a series of spectral lullabies. The recurring musical devices and themes that link these pieces to create a whole environment for the listener to inhabit and explore draw strong comparison to those collected in any church hymn book. This is all no doubt deliberate as the real 'Hardy Tree', from which the project takes its name, has a strong ecclesiastical linkage that I will leave to those sufficiently intrigued to enlighten themselves with. The sense that every note on this record has weight and has been received from another dimension by its creator is all pervading. In these grooves The Hardy Tree, acting as curator or medium, is telling you something vital about your past lives in the hope that your present one will become enriched, kinder and more connected as a result. And if that sounds profound and heavy its because it is.

"Through Passages of Time" belongs to another (green) world and congratulations should go to Frances Castle for divining this wonderfully touching collection and successfully capturing it on tape. It's musical psycho-geography par excellence and probably the most human record you will hear all year. Get it while you can as, like much of the city it commemorates, I am sure it will be gone before you know it.

Available on limited vinyl from the label direct or a number of small but perfectly formed independent retailers.