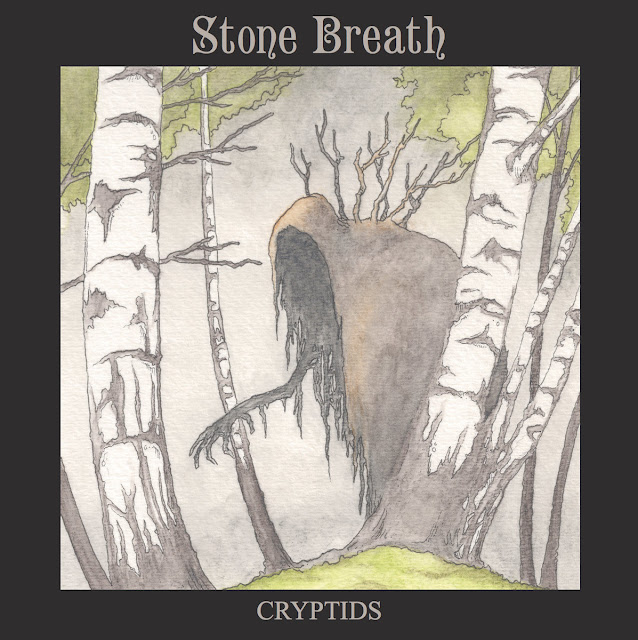 Timothy Renner’s legendary forest dwellers Stone Breath return equipped with both finesse and quiet power for ‘Cryptids’, an album which features a dozen songs concerning the band’s local Pennsylvanian folklore, cryptid creatures, ghosts and legends. This subject matter reveals itself to be ideal for a band that was one of the earliest instigators of what can now be described as the current ‘wyrd’ wave of psych folk, the glimpsed sasquatches, lycanthropes and mysterious bipeds from the woodland mythology find a suitable home amongst Renner’s spectral acoustic and banjo led laments. Aided by AE Hoskins on various instrumentation, Rod Goelz on bass and mandolin, Martyn Bates (of Eyeless In Gaza) on guest vocals and an appearance by long-time collaborator Prydwyn (of Green Crown), ‘Cryptids’ stands as both one of Stone Breath’s most accessible and most deeply chilling albums.

The album begins with the sound of footsteps crunching through piles of dead leaves before Renner’s familiar banjo enters for 'In the Red Witch House', a chilling tale of a lycanthropic child whose condition was said to have been caused by a coven of local witches. Indeed, the album pursues a musical telling of local tales and legends throughout, expertly put to song by Stone Breath's mossy and spectral, rural folk. This is followed by 'The Hidebehind' which adds recorder, xylophone and subtle percussion to a slow paced but stealthy sliver of acid folk. 'Trotterhead's descending mandolin melody and relentless, steady stalking pace generates an air of true menace and eeriness, conjuring a sense of being followed and discreetly watched by eyes that are not altogether human. Stone Breath are masters of their craft but here they seem even more focused and honed, there is an intensity in the brooding, malevolence that they bring to play in the telling of these folk beliefs. The English ballad 'Long Lankin' (previously and perhaps most famously heard interpreted by Steeleye Span) is given an unsettling undercurrent of droning organ as Renner's voice recounts one of the bloodiest and most supernatural of all the Child Ballads. These ballads travelled across the Atlantic as the Scots, Irish and English emigrated to the New World and many such songs and texts can be found as American variations of the originals, 'The Rolling Of The Stones' being a prime example. 'Long Lankin' fits perfectly in this collection of otherworldly, sad or predatory creatures and Stone Breath make this bogeyman tale their own.

'I Know His Name' is equally as disquieting, mandolin and drums calling time as a tale of an inhuman walker in the woods is recounted by Renner's deep baritone vocals, whilst 'The Singing Corpse' is a more reflective, melancholy piece which tells of a grave bound corpse which is said to be sighted singing hymns in an angelic, choral voice. Here the vocal duties are taken by Eyeless in Gaza's Martyn Bates who provides a heartfelt and genuinely beautiful coda to the song. 'Sticks' is classic Stone Breath, Renner's rhythmic banjo providing the structure for his intonations, as if uttering a chant to hell itself. Had The Incredible String Band been formed across the ocean in the dark, thick woods of New England rather than these shores this may well be what they would have sounded like. 'Far Away the Morning' is a mournful but gorgeous ballad whilst 'The Missing' is a skeletal folk ghost story that stays in the listener’s psyche long after the song has ended; it haunts you. The album closes musically with the majestic 'Apples for the Albawitch’, which tells of flute playing creatures who would lure unwary travellers away with their song, never to be seen again. One can imagine the hypnotic and bewitching appeal of Stone Breath doing exactly the same, taking spellbound listeners deep into the copse, never to return. There then follows several genuine recorded transmissions of locals recounting sightings in the woods of various terrifying and unexplained creatures, including police control room recordings. They are incredibly spine chilling and provide a hugely effective ending to what is surely a contender for the album of the year.

‘Cryptids’ is an album which stays with you long after the music has finished. Both the songs and the frightened voices from the vintage recordings haunt the hours that follow immersing yourself with this release and this is how it should be; this album is a forest filled with ghosts and creatures and is utterly entrancing. Leave the path, stray into the trees, feel the cold of the Stone Breath upon your neck.

Available now as a download and CD from the ever splendid Dark Holler Arts (Renner’s own label), the album comes replete with stunning artwork by Timothy. Do also check out the excellent accompanying book of Pennsylvanian folklore by the singer, ‘Beyond the Seventh Gate’ which can be found at the same sources.