In Gowan Ring - The Serpent And The Dove 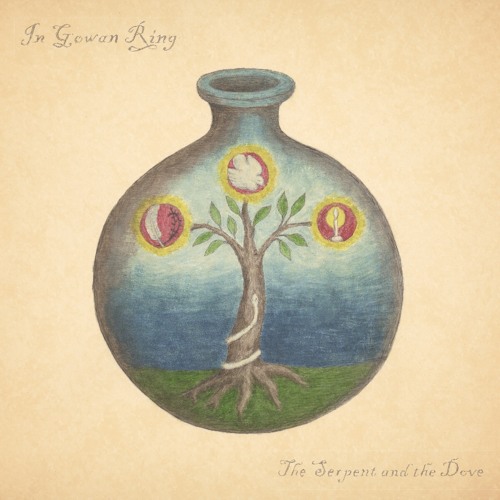 B'ee, a true modern day troubadour whose artistic vision has borne classic psych folk albums from projects In Gowan Ring and Birch Book, returns with new release 'The Serpent And The Dove' under the In Gowan Ring banner, the first release under this name in thirteen years. Influenced as much by early music as the deep well of 60's and 70's psych and acid folk, In Gowan Ring have delivered here a dark gemstone of an album, adorned with baroque and dramatic touches as well as more reflective, gentle rustic moments.

Opener 'The Serpent' is a majestic, medieval triumph of bowed strings, glistening orchestration and barely contained tension and drama. Reminding this listener of the works of Dead Can Dance and Soil Bleeds Black, this is music to lift the hairs on the nape of your neck. 'Thousands Of Bees' by contrast is a shadowed, reflective piece of chamber folk, melancholic strings underpinning B'ee's gentle and hushed vocals, reminiscent of both Roy Harper and Simon Finn. Deeply moving, accomplished and expertly crafted this is an incredible piece of contemporary psych folk. Next, 'Sial At Play' adds flute to a shimmering, quiet symphony of woodwind and early music instruments (which B'ee collects), drones drifting under the bardic vocals. Fans of Stone Breath, the work of Prydwyn/ Green Crown and, further back, the Incredible String Band will adore this. Both stirring and beautiful, this music is timeless and has ancient blood in its veins. The track ends with a solo suite of glorious woodwind. I'm not certain how a track can be both gentle and epic at the same time but In Gowan Ring manage this effortlessly. 'Julia Willow' is a woodland whisper, a Donovan-esque wander through the glades and copses with sunlight flickering and entering between the branches and leaves. A stately violin punctuates the acoustic air, adding a tension that hints at a darkness, of shadow places amongst the trees.

'Set A Candle In The Night' drifts into being on a river of acoustic finger picking and reverberated vocals, at once haunting and also uplifting. Distant drums and harmonies add texture and a wistful, orchestral layer. An incredible piece, this is a slice of pure psych loveliness that you must hear. The nine minute epic 'Field Of Dream' begins with Celtic strings and the clash of a gong as B'ee sings in the bardic tradition accompanied by bodhran, the tale unfolding in the twilight before leading into a medieval procession of finger cymbals and Jews harp. Again, the work of Dead Can Dance springs to mind and lovers of their oeuvre will find much to enjoy here. 'A Song, a Story and a Stone' starts with solitary piano before B'ee joins, a deeply beautiful and melancholic paean that reverberates and echoes through the mists, until blasts of psych guitar and sudden piano notes reflect the drama and sense of loss inherent in the song. One cannot fully describe the attention to very small musical detail that is apparent here, this is clearly one man's genuine vision and each bow of violin note, every piano note and every sonic embellishment is crystal clear and delicately powerful. Closer 'The Dove' returns us to the dark, string drenched sense of old Albion that was introduce with 'The Serpent', shimmering drones and the rattling strings of a zither building and growing until receding into the ether.

I cannot recommend this album highly enough. In the same manner as current listeners seek out and venerate the classic albums of acid folk bands such as Mellow Candle and Trees, so it will be with In Gowan Ring. This is an album of rare power, it's hushed strength coming equally from its emotive impact and lovingly adorned song cycles. A true treasure.

Available here now on vinyl, CD and as a download.