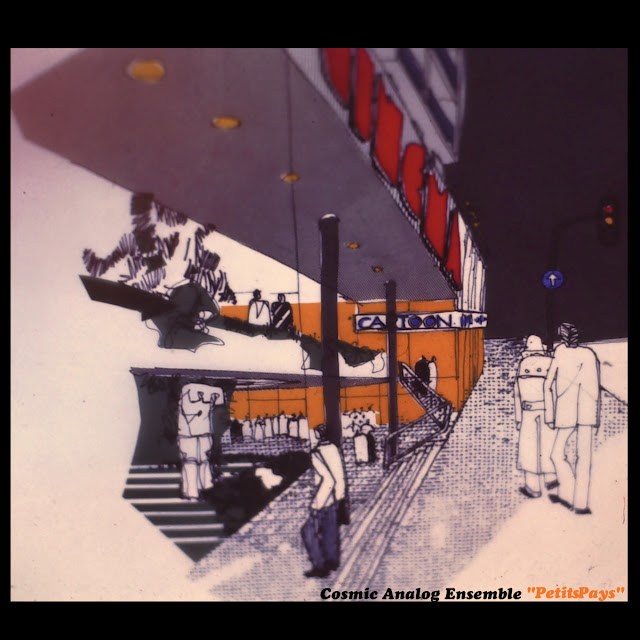 I must admit that we here are suckers for the sound of a well heeled vibraphone, farfisa and harpsichord (our ears even picked up a theremin alert ‘Les Tours Eiffel Sous la Tour Eiffel’). They create a sense of outer worldly mystery and magic that has you conjuring all manner of images of anything from romanticised picturesque landscapes of faraway retreats, to sci-fi strangeness, spy noir, and more besides.

No strangers to these ears, I stumbled across Cosmic Analog Ensembles’ alluringly kitschy and kooky ‘Murs Libres’ via the Active Listener Sampler #24 and immediately adored its vintage tonalities, likening it to a would-be musical hive mind born of Basil Kirchin and Raymond Scott personas.

‘Petits Pays’, their latest opus, is a mood murmured mirage that one suspects has been time-tripped from an age of arty flock wallpaper-adorned habitats envisaged by Pininfarina and Vadim, where the optimism of the space race (still in its golden age) contrasts and duels with the spectre and realism of the prevailing cold war. Both expressive and entrancing ‘Petits Pays’ sits on the sonic outer rings of a mid 90’s musical scene by way of a collective primarily populated and headed up by Stereolab, Broadcast, Plone, Pram and Scott Bond (the latter being much recalled on ‘Main sur Hanches, Doigts sur Manche’) - like minded souls who enthused and delighted in the retro futurism of shimmering 60’s accents and lush library lilts. It would be easy to lazily file Petits Pays’ under the lounge umbrella but in truth there’s much here that ought to appeal to those admiring of such imprints as Finders Keepers, Trunk and Italy’s missing in action Shado.

Amid this beautified 15 track bouquet romance arcs gracefully shimmered in forlorn Autumnal reflection, floral posies, and silken spy noir sophistication. Here you’ll be smitten by the deceptive down tempo kitsch funk of ‘The Concept & The Purpose’ with its cutely cool tropicalia flavouring recalling a would be tryst between Lemon Jelly and the Winston Giles Orchestra, while there’s a faintly detectable noir chic attaching to the Third Man-esque ‘Vaise a l’aenvers’ to be savoured. Elsewhere the quite delectable ‘Sombre Affair’ freefalls seductively into an autumnal thoughtfulness reminiscent of the much missed L’Augmentation, while the bitter, sweetly reflective ‘National Blues’ is graced by a slyly off set yearn and tenderness that has you imagining it being some lost and forgotten score sketching, hatched during down time by an afterhours studio gathering of Barry and Grainer types. All said we here are quite adoring of the brief visitation made by ‘As Much as a Sonnet’ – a trippy slice of lunar loveliness twinkled by the galactic fanfare of opining cosmic carousels.

"Petits Pays" can be downloaded for free, or streamed here: