Midnight "Into The Night" 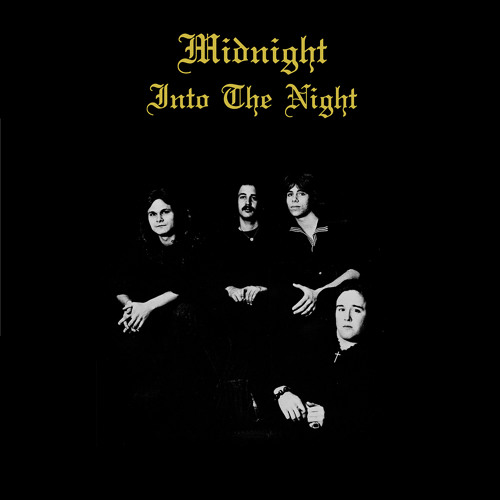 Drag City has always had a spectrum of greatness to their releases. Whether you're looking for Bill Callahan and Cynthia Dall, Ty Segall, Joanna Newsom or Wand, they've always delivered. So, now there's Midnight, who, like their label mates Death, are a bit of a time capsule, freshly unearthed for new listeners.

They've got a somewhat classic story, too. Formed in 1974 by four high school age friends - all of whom were taking music lessons at Homewood's Melody Mart - they began as a covers band, paying raucous homage to Black Sabbath, the James Gang and the like. Then there were originals, of course. They were never signed, represented, produced or managed, but by 1975 were playing at house parties and colleges in the Chicago area and soon, clubs, even though they were underage. And by the end of the decade, they were no more, with only a few recordings to their name. Among them was "Into the Night," recorded in 1977 and privately released in 1978. More than 30 years later, it still lives and breathes the lifestyle that might have been if they'd continued.

As many of us probably have in common, I was in a high school band, loosely playing some strain of rock. Even before my first listen, Midnight's song titles channel the angst and misanthropy I - and probably everyone - felt, especially as a suburban American teen, which remains timeless, no matter the decade of its origin. Nostalgia hits strong with titles like these: "Into the Pit," "Suicidal Ways," and "Auto-Kinetic Illusion." So, as "Train of Thought" kicks everything off, the heavy riffs and Frank Anastos' vocals lead way, way back to a time when the guitar leads were raw and everything - save that one per album ballad - was a bit faster paced. Tracks like "Smoke my Cigarettes" and "Into the Pit" highlight the band's uncanny and timeless ability to hone a riff to its barest parts and write truly memorable hard rock.

There's a heavy dose of pathos behind each of these tracks. Even the time piece boogie and ballad tracks are heartfelt and genuine. All in all, "Into the Night" is a time capsule full of heavy party riffs and all around good times.