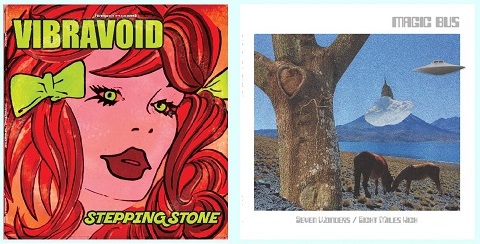 Magic Bus are busting out a new single on the always interesting Fruits de Mer imprint, double handed with a pair of tunes – “Seven Wonders” and “Eight Miles High” (yes that one). The ‘A’ side is a complete doozy and much the better of the two with its slowly rising intro, laced with keys before crashing into a slow waltz beat, not unlike hopelessly obscure early 70’s UK prog monsters like (a mellower) Czar, Gracious, Spring or Cressida but most definitely giving serious nods to prime Canterbury Scene fun seekers like Caravan. I particularly dig the flute led extended outro with it stabs of fuzz guitar and an organ solo that is pure ‘Land of Grey and Pink’. Ultimately though, Magic Bus transcend their myriad influences on ‘Seven Wonders’ and create a progressive pot-pourri all of their own. I wanted to listen to it again immediately and then again immediately after that. This is a very good sign that they are doing something very right. Like the best prog, "Seven Wonders" has many layers so you can really get involved with it. It’s from their new album apparently, which has the suitably proggy and entertaining title, “Transmissions From Sogmore’s Garden”. Someone should send me a copy to review. Great stuff.

The flipside really does up the ante with a very interesting take on one of the greatest songs ever written (in this humble writers opinion), The Byrds motherlode, ‘Eight Miles High’. Opening with a strange swirl of hurdy-gurdy/sitar drones, the opening lines of the song chanted slowly like some ancient Gregorian Monk scene (with mushrooms of course), you begin to fear a bad trip may be about to descend because let’s face it if you drone on Eight Miles High for 5 minutes it’s a pretty confrontational trip. On reflection the intro sounds like Tame Impala somewhat implausibly! However, Magic Bus are hip to this potential deal breaker and kick out the jams about 2 minutes in and the song opens out into a nice Brian Auger/ Soundcarriers vocal trip before stretching out for some more of that rather tasteful flute action. It’s cool, its retro and you can almost taste the fondue wafting on the formica dining table (swiss chocolate fondue, with mushrooms of course) before the final Mike Ratledge inspired keyboard solo flashes by and zooms skywards, leaving its vapour trails lingering around your ears. I am going to resist the obvious analogies given the name of the band in closing but thoroughly enjoyed my ten minutes of Magic Bus.

The other 7 inch offering is from the rather better known inner-space travellers Vibravoid, who have picked three of their (presumably) favourite 60’s arty-facts and had a dart at them. The ‘A’ side is a fairly fearless assault on The Monkees hit ‘I’m Not Your Stepping Stone’. In fact it owes a lot more to the version by The Flies, so beloved of sad "Chocolate Soup for Diabetics" fixated anoraks like me, with its slightly more psychedelic overtones. Here, Vibravoid give it the full treatment with heavily treated vibrato/echoed vocals and fuzzy guitar replete with tasteful backwards guitar solo bringing things to sudden halt. Next up is a dart at Traffic’s classic solipsistic trip, and perhaps the first ever ‘shoegaze’ record, “Hole In My Shoe”. Now for some of us of a certain age, this song is dangerous territory given the treatment meted out to it by ‘Neil the Hippy’ from BBC TV’s The Young Ones on his remarkable “Heavy Concept” record from the mid 80’s and subsequent appearances on Top of the Pops with this tune as the lead 45. However, if we set that aside, we have a nice stab at the song and those not mentally scarred by their childhood television habits will find much to love about this - especially the dreamy ending. Schweet.

Matters conclude with a no-nonsense/lots of nonsense battering of HP Lovecraft's ‘The White Ship’. We are firmly in the land of the far-out here, with this deconstruction anchored by its sitar, fuzz drones, and spectral echoed and phased vocals that endlessly empty out into a cosmic slurry of aural stardust and general pandemonium (honest). It is a strangely impressive journey, if not a little scary, which will test your ’third’ eyesight to the max by the time the journey's end arrives after 7 minutes of sonic attack. Recommended for night trippers everywhere.

Also released in this batch of Fruits de Mer singles are new 7"s from vintage psychedelic people Nick Nicely and Tir Na Nog. You can order any, or all of these singles directly from the label here. Non UK residents may have more luck with the fine people at Norman Records.