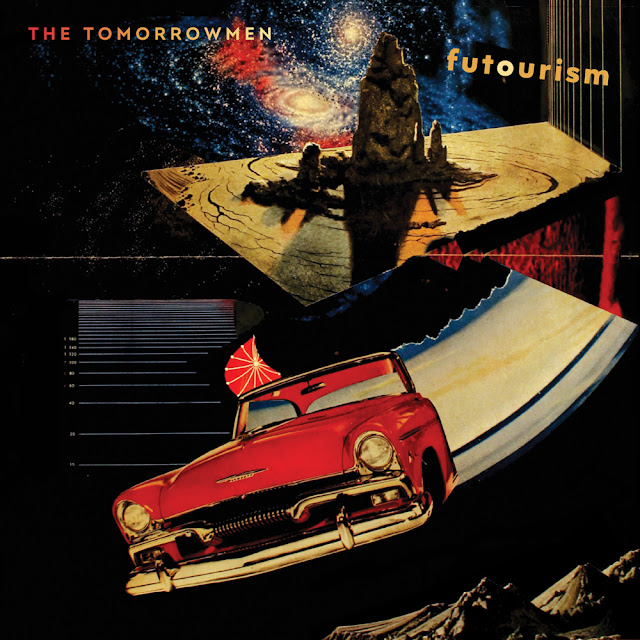 One thing I'd like to cover a bit more of on the Active Listener is instrumental surf revival, but I find myself largely disappointed by the contemporary releases I hear, with bands either sticking too closely to the template set in the early sixties (with clinical contemporary production), or going too far the other way and losing that indefinable surf magic somewhere along the way.

One band that get it right bigtime are San Francisco four piece the Tomorrowmen, who have just released their sophomore effort "Futourism", which I've been spinning relentlessly for the last couple of weeks, with all of the right buttons being pressed.

It almost seems unfair to call "Futourism" a surf-revival album. There's absolutely no way that this album could have been released during the era of the initial surf craze - it's way too forward thinking for that, but everything that I love about the music of that era is present here, particularly the propulsive drums, and the tremelo-laden guitar work. But like their San Francisco peers the Mermen, the Tomorrowmen stretch out beyond the restrictive confines of the genre into more experimental areas, without ever losing sight of where they're coming from. Add an appealling sci-fi twist (not uncommon for this genre, but rarely integrated so seamlessly), and you're on to a winning combination.

Opener "Parsec's Paradox" starts things off in a more traditional mold, but even here, it's apparent that the guitar work of Mycroft Eloi and Lazarus Longfellow is much more fluent and investigative than the majority of their peers and forefathers. And their melodicism makes its presence known immediately, with a palm-muted staccato section here, smothered in reverb which is absolutely gorgeous. And as the album progresses, it becomes more progressive, with the more traditional approaches of the first half blossoming into latent psychedelia and wilful genre-straddling for an extremely impressive second half, exemplified best by the clockwork syncopation of "Hemispherical Synchronization".

"Futourism" is an extremely impressive and memorable example of instrumental progressive surf music, a perfect encapsulation of the futuristic retro-chic exhibited on its sleeve, and a damn fine album to boot.