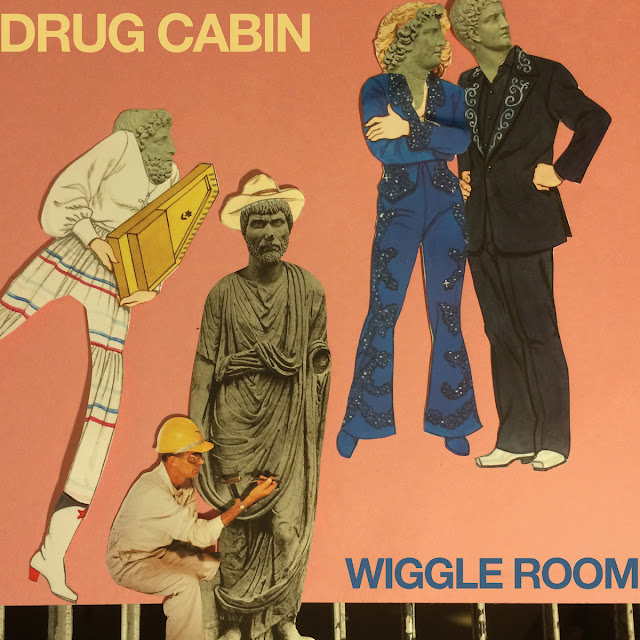 They say that somewhere at any given time on the planet, ‘Stairway to Heaven’ by Led Zeppelin is playing on the radio. Now I don’t know about that but I do have strong suspicions that in a small part of California, Drug Cabin are living in a version of the Monkee house where ‘Easy Rider’ is jammed on the television 24/7, the weed is high grade and never runs out, the air outside is cool and clear and the sounds of the Pacific are drifting up the Laurel Canyon in to the living room. Then there is the communal stereo which is spinning an intoxicating mix of late era- Beatles, Byrds, Steely Dan, and other luminaries of laid back late 60’s and early 70’s psych tinged goodness. And the bong is never far away…in their wiggle room.

This melange of sounds is clearly a heady mix and in the wrong hands could go awry. Drug Cabin know this and have honed these 12 songs to perfection to take the active listener on a super-chilled ride along the coast from Monterey to Malibu and beyond. In the current firmament of psychedelic west coast bands this is a good thing, as Drug Cabin are distinguished not only by their amazing name but also by their musical weapons of choice. This is definitely and defiantly stoner music of the gentle kind that deploys melody and concise musical arrangement to maximum effect. Its defining elements - the almost but never sloppy drum beat , the slowly chiming guitars, the amazingly tasteful deployment of breezy pedal steel on much of the material, giving extra life to the sweet and warm melodies, and super stoned, tight vocals mesh together perfectly for the majority of the ride.

Drug Cabin, despite their obvious appetites, are dealers in melody and operate with the kind of discipline that would make Henry Ford proud. None of the songs on ‘Wiggle Room’ last more than 3 minutes and there's twelve of them making this a record that never overstays it's welcome and has you hitting repeat over and over…

More about the songs? OK, well lyrically they are generally of the oblique variety fondly mined by the loaded so when the track ‘Wonderful’ exclaims that ‘you’re fucking wonderful in every way’ you listen up and immediately smile. ‘Ruby’ takes The Byrds ‘Wasn’t Born To Follow’ as its starting point and heads out into the country. Opener ‘Handsome’ is busy doing nothing and making pretty pictures in your head. Many of the songs seems to concern themselves with relationships of one kind or another but to be honest Drug Cabin could be reading their grocery shopping list and you wouldn’t care. Drug Cabin have a song called “Stoner”, and you know that a) they should and b) its good – like all their songs on this fine debut long player. Its marked by a playful exuberance that never tries too hard. Everything is A-OK and you know they love you. There's also a cool song called 'Steely Dad'.  'Wiggle Room' enjoys itself and it's infectious. The record closes with the epic ‘Space Program’ floating on a circular riff that’s pure Acapulco gold (the full trip clocks in unbelievably at 2 earth minutes and 50 earth seconds)

So as you may have guessed, Drug Cabin are about creating a mood. A good mood. A gently stoned good mood to be more precise, where at any moment you think 'the Croz’ or ‘Neil’ or the ghost of John Lennon may drop by to jam and chill. It’s that kind of scene on this easy, glorious, sunny record. Drug Cabin invites you into their world and ask you to pull up a corduroy cushion and inhale deeply. But never bogart that joint my friend, that would be uncool.

In contemporary terms, maybe you could think of them as Real Estate's groovy cousins or MGMT’s laid back neighbours. I am also reminded somewhat of the sadly inactive San Francisco band Oranger and their' lost' classic “Shutdown The Sun” but these comparators are merely general pointers for you dear listener. Drug Cabin sound mostly like Drug Cabin.

'Wiggle Room' is available only from the band website/bandcamp on limited vinyl (a run of 250) and digital download. They have also recorded some other stuff that’s available on their bandcamp page but I haven’t listened to it yet.Hey I’m in no hurry and I guess Drug Cabin would appreciate me taking all the time I need…Check it out.