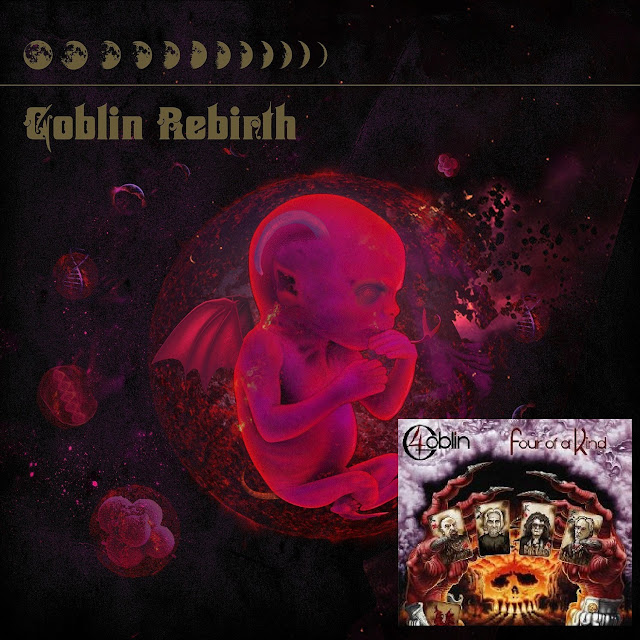 Trying to follow the various permutations, offshoot groups and lineup changes of Italian horror prog legends Goblin is almost as complicated as doing the same with Hawkwind. Muddying the waters even more come these two new releases from Goblin Rebirth and Goblin themselves.

The Goblin Rebirth set was apparently recorded back in 2012 but wasn't picked up by a label until Relapse snaffled it earlier on this year. This is surprising for two reasons. Firstly, Goblin's brand of soundtrack prog-horror has never been more popular and influential than over the last few years. And secondly, "Rebirth" is a very good record indeed. Either these guys hid it under their beds and didn't shop it around labels until recently, or most labels are still run by clowns - certainly the case with the majors, but I'm surprised some of the better indies weren't fighting over this.

Goblin Rebirth features the original Goblin rhythm section of Agostino Marangolo on drums and Fabio Pignatelli on bass, alongside Giacomo Anselmi on guitars and Aidan Zammit and Danilo Cherni on keyboards. It seems to reflect a conscious decision to stay true to the band's classic sound, without shying away from the opportunities presented by more up to date technology. Unusually for this sort of project, it balances these two needs perfectly and Claudio Simonetti's compositional skills are not missed. Rebirth guitarist Giacomo Anselmi is a more fluent, busier player than original Goblin guitarist Massimo Morante, as evidenced by the long winded, but rather nice guitar solo on "The Forest" which takes things in a more Floydy direction, but this aside, "Goblin Rebirth" follows in its predecessor's footsteps very nicely. Full of horror atmosphere, classic Goblin riffs, and chiming synth bells ala "Suspiria", this will be right up most Goblin fan's collective streets. A very pleasant surprise.

Goblin Rebirth are no more however, but that is just fine, because their demise is the result of Marangolo and Pignatelli  reuniting with classic era members Massimo Morante and Maurizio Guarini as Goblin. With four of the classic era's five members present (as alluded to by the album's title "Four of a Kind"), keyboardist / composer Claudio Simonetti (currently touring with a band billed as Claudio Simonetti's Goblin, with no actual Goblin members) is the only key member missing.

It's funny then, that this sounds less like Goblin, than the Goblin Rebirth album. It seems here, that given the freedom to record an album without restrictions imposed by onscreen demands, Goblin have taken the opportunity to flex their chops and show their diversity. "Four of a Kind" is a much more progressive Goblin, with the harsher guitar tones that modern prog-rock demands, and busier playing that often reminds me of the last few Opeth albums. Clearly, those wanting a continuation of "Deep Red" or "Suspiria" aren't going to find their ideal Goblion album here then, but there's still plenty to recommend it. Even when inspiration occasionally dips, forces are rallied to rescue things before the rot sets in, particularly on "Dark Blues", a generic blues number that turns into a creepy vocal chorus tour de force. "Kingdom" is the standout track for me though, and it's no coincidence that this is the track that sticks most closely to the classic Goblin aesthetic, with a spine tingling keyboard line at its core.

Two interesting albums for fans here then, where the guitar is allowed to dominate a little too much to fully trick the listener into thinking they're hearing classic, vintage Goblin. It'd be interesting to see whether Simonetti's presence on either of these albums would have addressed this. As it stands, I'd definitely recommend "Goblin Rebirth" to fans of the classic Goblin horror-prog sound, and "Four of a Kind" to a more contemporary progressive audience.

"Goblin Rebirth" is available here (UK/EU), and here (US).