The Trembling Bells "The Sovereign Self" 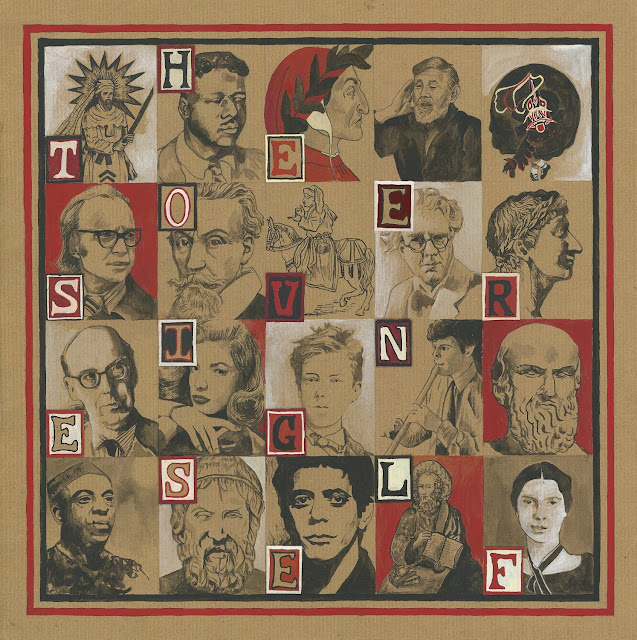 If the vast sea that is current popular music seems to you mostly swells and waves of irrelevance then you are primed for Trembling Bells. Not that their music stands self-righteously above or apart — all lines of what can feed a band are open in this ensemble. It’s just that their diverse capillaries all give to and are fed by The Source, while The Vagaries of Pop and The Purities of Folk perish equally and brightly in this band’s psychedelic fire.

Of course, this music reaches back to the sixties electric folk template — to rouse the spirit of the earth, yes, and that reach continues — back to ancestral memory and a sense of place that is not bound only to lands and histories, but to ledge-dwellers of every generation, including those no longer living. These Bells are not the only ones, but they are at the center of this procession, extending forwards and backwards in time, while spreading radially in the now. And procession it is, though hard working, and probably leaping (sometimes even in the way of Monty Python), and winding, if not amongst stones and steles, then through hut and hill, or at least between a field somewhere and somebody’s house.

There they are, coaxing forms into grins and grim, reveling in the hollow body that gives voice, facing on even ground the best that has gone before. And as with Dennis Potter, from whom they borrowed the new record’s title, "The Sovereign Self", their eclecticism suggests a populist ideal — they are not at all averse to mixing their deep cultural and historical awareness with random bits found at the curb. The album cover hints at all of the above as it features 20 Lavinia Blackwall portraits of people of lateral interest to the band, including Potter, Blind Willie Johnson, Rimbaud, Emily Dickinson, an urn-full of ancient Greeks and Romans, Dante, and, from The Padstow May Day Festival, Obby Oss.

“Oh, to find a place where each good deed isn’t rendered in vain by the spreading seed of a nameless pain” — so begins the record with "‘Tween The Womb and The Tomb", a dirge driven by a bodhrán-like snares-off roll, setting a medieval tempo. Sounding something like a missing track from Polanski’s "Macbeth", the song introduces Alasdair C. Mitchell, whose interplay on guitar with original member Michael Hastings continues throughout the album. There are occasional percussive events that suggest street noise. These widen the space through which the tune solemnly moves. Eventually the rumble and lamentation break into triumphant scales before the song starts anew as it began, reaching abandon with Blackwall’s voice echoing and “multiplying” (literally and figuratively) as the organ begins an extended freakout, coming to climax in a blend with the opening phrase, echoing the structure of the entire album, which begins and ends in pain.

But don’t let it get you down. It’s transformative.

"O, Where Is St. George?", song two, offers vignettes of black comedy riding a Simon Shaw bass line (topped off by John Wilson on violin) between repeated refrains of the St. George fragment from the Padstow May Day song. By the third St. George chorus, the two time signatures of the song, heretofore separate, intermingle. “The sentimental ties and debris of the day,” call them the messy bonds and wreckage of a relationship, loom like a doomed cityscape and even though demolition is familiar in Glasgow, the singer lets us know that the city was still “a gas when Cueball ruled the scene” and though circumstances, “slim returns and vain expense” plagued him, he wasn’t completely destroyed — the voices in his head sang in four part harmony. The interplay of original lyrics with the Padstow sample in this song follows a strategy used in Adieu, England, from their second album, "Abandoned Love". In "Adieu", the title phrase is sung in group voice and couched in tradition, alternating with drummer and principal songwriter Alex Neilson’s vocal delivery, singular, as is his voice, though in this instance interestingly reminiscent of Dylan’s phrasing in "A Hard Rain’s A-Gonna Fall."

The frantic organ and guitar figures of "Killing Time In London Fields" build in portentous time to a church bell tower chime, in turn interrupted by a thudding industrial heart beat, which is itself cut short by a snare drum flam signaling a full tilt back into the riff, full of garage-appeal, even getting a little Iron Butterfly. Blackwell soars. A wandering sailor may jerk and sway to gargoyle heads detached from their historical perches in the bobbing horror. This tempest-ually broken teacup of a song ends with a leisurely 4/4 featuring a box-step gem, courtesy the Prog-leaning Neilson, “Eve took the apple and the orchard fell apart” (Sophie Sexon on a pastoral flute).

If by song three you are not yet convinced of the dialogue on guitar between Hastings and Mitchell (really?), you will be by the end of "Sweet Death Polka". The lyrics have some interplay too — they nest with the previous track — “I met myself in the heart of wood” reaches back to “time is the echo of an axe within a wood.” This lyrical dove-tailing is characteristic of the whole record.

Beginning with a relentlessly repeating, jagged 5/4 throughout most the song, "Bells of Burford", which revels in the inevitable ruthlessness of nature, sets a darkened stage upon which Blackwall’s vocal decrees issue from a severe precipice formed by the tectonic upheaval of drums, bass, guitars, and organ (including a guitar passage that goes right to the edge and a second one with Sybren Renema untethered on baritone sax). The voice at first offers an expository gesture, “In a town…” but then lifts the ever more insistently repeated riff into a sonic maelstrom that seems to issue from the singers extended arm, with her fingers propelling the sound waves from within her gravity defying bell sleeve.

The austerity of that topography can only be followed by a little country piano, but the lyrical bloodletting continues and returns to a central premise of the record — the gift that destroys, or as in "Sweet Death Polka", a skill tragically misused — “cutting up a bird to possess its song.” "The Singing Blood" is a true country tear jerker, rhyming a heart-as-landscape plaint “the sadness deepens like a river bed” with “and a bullet in your head,” while delivering a twist in-between — “stuff a flaming rag into the mouth of time.” And again, the stacked lyrics — “you can’t admit polished stone back to the earth” paired with the semi-precious stone of "(Perched Like a Drunk on a) Misericord", which follows and continues the country feel, though at first and in a later passage it sounds more like a harpsichord and fuzz-box parody of some national anthem. Fenwick does come to mind. The tongue-in-cheek pomposity then segues to a country shuffle which kicks off with typical Nashville lyrics, “The lion, the crown and the unicorn (calling all misanthropes).” The bridge in this number is delightful beyond words and reveals a little indigenous American influence, adding some faux-Western to go with the wyrd-Country.

It’s only right that the album should end on a seventies anthem, "I Is Someone Else". With this number, sounding somewhere in the vicinity of Deep Purple and Blue Öyster Cult, the band continues to mine its sources with integrity, never taking too much. This high energy relative of "Killing Time In London Fields" and "Bells of Burford" re-asserts that this a rock album. The words speak of spilled drink stains forming maps of undiscovered continents (“Oh to find a place…”) and riff on past forms as they get in line with Jean-Luc Godard, Barbara Kruger, Stephen Hawking, and Roger Miller to add yet another variation on that famous threat, “when I hear the word culture…”

So for now finish that sentence any way you like, but buy this record — "The Sovereign Self" is assured, and quite honestly, fulfills many promises. It is a tour de force, a masterpiece of psychedelic release and clearly an emotional necessity for its creators. And it feels like it won’t be followed by anything less.