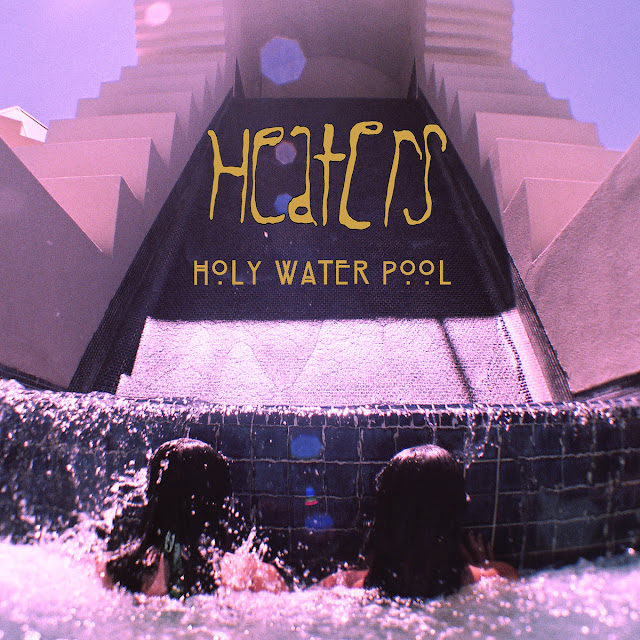 Out of Grand Rapids, Michigan comes the debut LP from psych-surf-garage trio Heaters. They're coming at you drenched in reverb and jangle and bringing the Indian Summer. This release, scheduled for the 25th of September, is called "Holy Water Pool", and fans of the sounds of Jacco Gardner, Night Beats, and Dead Meadow, will rejoice when their ears take a dip. This is mostly a mellow trip, accompanied by a steady groove and some mostly incomprehensible vocals, whilst you try to figure out what exactly is going on and why your arms are flailing back and forth and your head is bobbing involuntarily. It's enjoyable, it's pleasing, it's a gentle psychedelic ride that makes sure there are no bad trips. Everything is good here. Put some sunscreen on and dig your toes into the sand of your mind's eye.

The album hits you with "Kamikaze" first, which is a beautifully wonky and groovy way to set the scene. It's catchy, melodic even, and that 60s-influenced guitar sound is just oh so good. It permeates the entire album's lo-fi sound with its wet-yet-bright tone. I would say the most garage sound you'll find in this album is in the following track, "Master Splinter." I love when a song transcends its standard structure into a bit of confined, cosmic chaos, and there's a bit of that in this song. A little bit of grit can go a long way towards showing the dynamic of a band. This song makes me speculate that their live shows are probably really fun. Some other stand out tracks for me include "Hawaiian Holiday," which is a really nice, surfy instrumental which would make anyone long for a board and a beach, and "Honey," which while surf-infused, is a little more upbeat and builds into a beautiful rock n roll beat. And don't forget everything is teeming with the aforementioned jangle and reverb. The last track on the album, "Dune Ripper" is what I imagine it'd sound like if The Human Expression threw a beach party. In fact, it's my favourite track on the album, but that probably says more about me than it.

It's summer all the time for Heaters, and if you're a psych or surf fan looking for that perfect soundtrack to your west coast daydreams, Holy Water Pool is what you're after. The water's fine and lost in tyme.