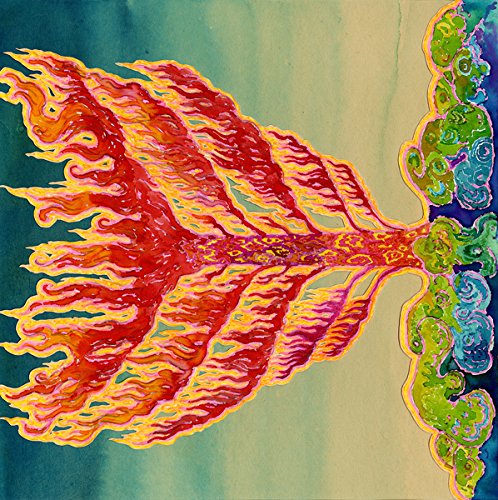 I've been vaguely aware of Swedish psychedelic explorers Hills for a while now, but it wasn't until I set eyes upon the startling International Harvester meets Incredible String Band sleeve of their newest album, "Frid", that I really resolved to listen, and boy have I been missing out it seems!

"Frid" is a really great psychedelic record. Not a record of pop songs with psychedelic production techniques. Not an album that seeks to be called psychedelic by layering on the reverb. This is a proper, exploratory monster of an album, the sort that the Swedish have always excelled at, as far back as International Harvester, and as recently as Dungen and their various offshoots. And "Frid" beats them all hands down as far as I'm concerned.

Mostly instrumental, Hills make masterful use of drones to set a mood, whether it be the Eastern drones of "National Drone" or the heavy Black Sabbath meets Amon Duul guitars of "Milarepa".  These drones help "Frid" to create a head-nodding, hypnotic effect that draws the listener into a deeper, more immersive state of appreciation, an almost meditative state that belies the heaviness of the material. Even when vocals take centre stage on "Death Will Find A Way", they're used more as an instrument than anything else, another layer of drone.

Hills demonstrate excellent self-awareness on "Frid". Albums like this, which exhibit a uniform mood often get bogged down, but Hills have an uncanny knack for knowing when to add an extra layer, an unexpected instrumental lead (flute is used particularly effectively on "Milarepa"), or allow a sequence to progress, without getting too busy and spoiling the mood.

I can see this getting played a lot at Active Listener HQ. It's still revealing layers with each play, and it's totally won me over to a style of psychedelia that normally leaves me a little cold, unless it's superbly done. And this is a superb record, have no doubt about that. It's likely to be the best psychedelic record you'll hear this year - top five if we have a particularly good run in the next three months.