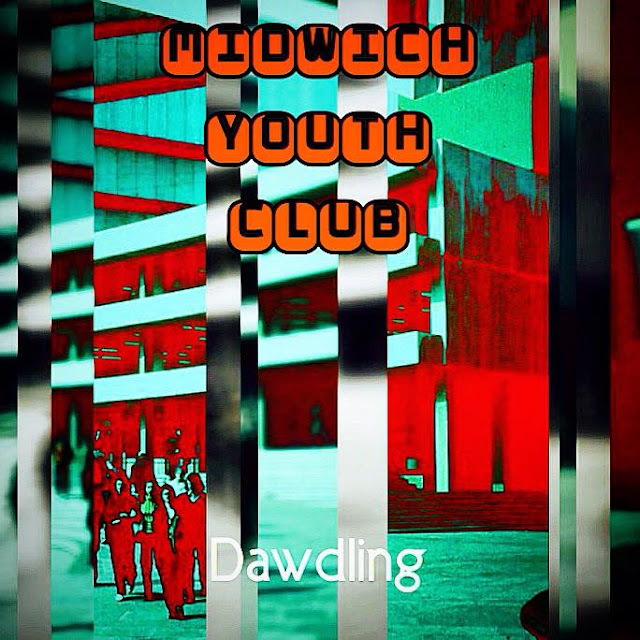 The prolific Allan R Murphy (aka Midwich Youth Club) has been quietly releasing instrumental and experimental but highly melodic 'Radiophonic Post-Punk Kraut Prog' for a number of years now, garnering both critical acclaim and collaborative mix work with artists such as Aberdeen sonic warlocks Palace Of Swords. Recently featured in Dave Thompson's mammoth book of current psych and electronica artists 'A Seance At Syd's' it starts to feel as though the world has caught up with Midwich Youth Club's multi layered universe, that they now find themselves in the current folk psych/ spooktronica Zeitgeist. 'Dawdling' then, comes at entirely the right time and, if you haven't already, this is one club that you will want to pay your monthly subscriptions to.

Opener 'First On The Swings' is an epic introduction, masses of tentative keyboards giving way to crashing drums and acid freakout guitar whilst additional Sixties style chiming chords underpin a Tomorrow People-esque melody that will remain buried in your consciousness for days afterwards.

'A Mind Made Of Glittery Bubbles' begins with sped up analogue bleeps and whirrs, its hallucinatory rhythms alternating between glistening synth harmonies and oscillating effect laden interludes. It is mindblowingly impressive and genuinely exciting; this is not electronica of the minimal, metro-gnomic repetition school but of a lysergic and wigged out, hyper creative and full speed ahead visionary take on music that is more akin to Joe Meek, Silver Apples, Wire, The Fall and Magazine. Indeed, 'Your Mouth' sounds not unlike something from the Howard Devoto led post punk supergroup's 'Real Life', its insistent beat, freaked out time signatures, John McGeoch guitars and shimmering keyboards come screaming out of the starting blocks and don't let up.

Next 'Skiving Off' also rushes along in a thrilling haze of fuzz guitar harmony, vintage keyboard glitter and xylophone. Prog style swooshes and crescendos abound, though it is the lean and controlled prog of King Crimson's Red or Van Der Graaf Generator, repeatedly building and lifting the track to greater heights of drama and intrigue.

The splendidly named 'Cyder Pirates And The Bench Of Solitude' is a furious garage stomp that shifts into a mass of mellotron melody before returning to psych guitar arpeggios; you need to hear this, it is a veritable electric symphony.

'The Anti-Stroller Brigade's glacial keyboard strings and stabs lead into a harmony that is part Gabriel era Genesis, part Trish Keenan's Broadcast. Then, without warning, it becomes an analogue carousel, disorientating blips and bleeps whizzing around the ether. This unpredictability is one of Midwich Youth Club's major strengths; this music goes where it wants and needs to go, not where convention dictates, which make it hugely original and properly exciting. 'Stop And Search's rubbery bassline undertows a wall of electronic sound and thunderous rhythm that changes gear from spaced to post punk dub a la Killing Joke with ease.  The following 'Let's Go Home' is an indie guitar classic of the type that Mark E Smith would be proud of, early OMD synth pad drums mixing with laconic electric guitar.

The truly epic and massive 'Kevin Turvey, The Man Behind The Green Door' takes Unknown Pleasures era Joy Division's stridency and power and mixes it with wave upon wave of haunting vintage synths before tripping off into a more psychedelic stratosphere of reverberated guitar and echoing effects, squelchy bass and entirely new galaxies of sound. A progressive electronic suite, it slides smoothly from piece to piece, from glistening Tangerine Dream style atmospheres to new wave breakouts. Something this inventive, this tangibly alive and crackling with creative energy deserves to be heard by as many listeners as possible. The track builds to a heady, Hawkwind-esque finale that rips out of the speakers with acidic aplomb, bursts of Kosmische guitar and motorik drums exploding in sunspots of melodic exuberance.

Any of Midwich Youth Club's releases are to be recommended, however 'Dawdling' is a huge, ambitious and successful meeting of electronic prog, post punk indie and Krautrock sensibilities. To be played loud and possibly with the eyes closed, this music does anything but dawdle, it is liquid fuelled and electric, it lives and breathes. Join the club, do not hesitate.

Available now in a lovely, handmade sleeve from the ever excellent Reverb Worship.