Come & See Me - Dream Babes & Rock Chicks From Down Under 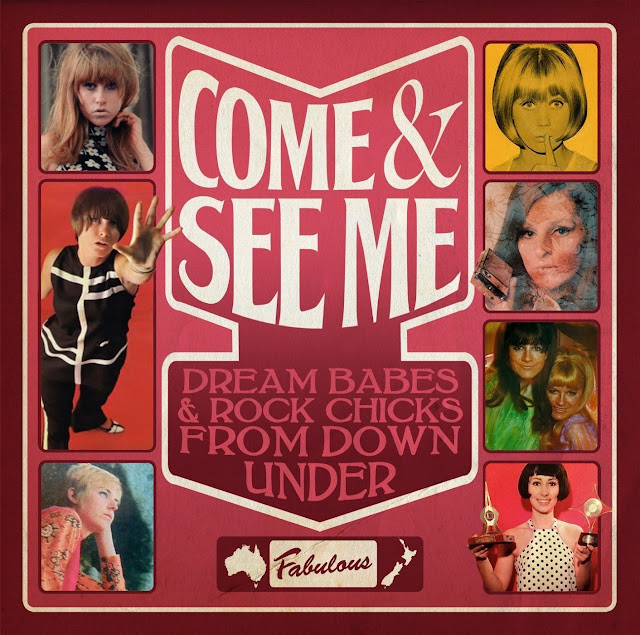 This new collection of New Zealand and Australian recordings of girl groups and rock chicks from Frenzy music (licensed to RPM) is a real eye opener. The down under territories were not progressive places in the sixties, and the releases from these countries that have been given a chance to infiltrate the international reissue market paint a picture of a male dominated industry.

Given this, I was surprised to find that this was a double when it arrived - a particularly full one too with 58 tracks. A certain amount of filler was anticipated then, but compiler Grant Gillander has done a spectacular job here, uprooting all sorts of great things that even as a local myself, I was unaware existed, and am blown away by the quality of. Most of the featured artists are pretty obscure. Even as a New Zealand local I'm unfamiliar with the majority, and those that I do know are usually remembered as somewhat lightweight - although there featured tracks here are uniformly gritty, and there are a number of tracks here that charted highly when released, even if history has tried to erase them from its books since then.

"Come & See Me" is partly educational then. After listening to this, you'll certainly be convinced that there was a very strong female component to the Australasian music scene of the sixties. But it's also one of the most entertaining history lessons you'll ever have, with a diverse and gritty mixture of beat, mod, northern soul, and hippie psych, all embellished with the sorts of era-appropriate trimmings that will have crate-digging 45 hunters reaching for their wallets with haste.

It's not all unknown outside of these territories either: the Chicks' "Rebel Kind" was recently unearthed and given lead billing on Ace Record's latest entry in their beaty "Girls With Guitars" series, and in all honesty, it's one of the tamer beat tracks to be found on "Come & See Me", and no competition for the facemelting freakbeat guitars on the Clevedonaires "He's Ready" - wow.

Elsewhere, Liverpool import Sandy Edmonds supplies a great version of Jackie DeShannon's "When You Walk In The Room" which was a deserved hit at the time (and still sounds great now), and the Field Twins' "Someone Cares For Me" sounds like the Shangri-La's as a garage band, while Lynne Randell's "Stranger in my Arms" is the greatest northern soul anthem you've never heard. And we're not even half way through the first disc at this point.....

The bangers keep coming, and there's not a single moment over these two and a half hours that allows the attention to wander. Absolutely essential.