Empty Vessel Music - There's Nobody Hiding Under The Gorse Bush 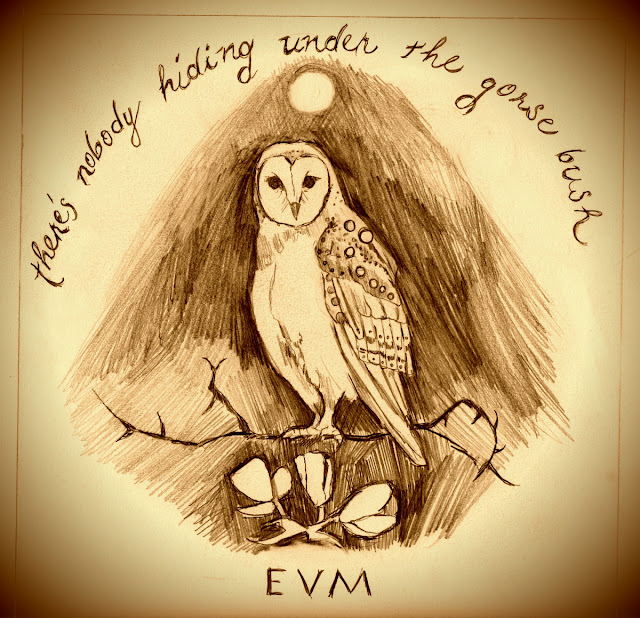 Empty Vessel Music, the one woman project and vision of Portland, Oregon's Jennifer Jo, sees her new long player 'There's Nobody Hiding Under The Gorse Bush' released on the French Wild Silence label, and this feels like a very appropriate matching indeed. Both band and label are highly individual, creative and concerned with presenting heartfelt and beautiful art via a careful and considered output with a deeply visual aspect. Jo herself is a visual artist as well as musician and Wild Silence's releases (that have featured, amongst others, Richard Moult, Sophie Cooper and label owner Delphine Dora) and sleeve art is always presented with great care and emphasis on quality. Empty Vessel Music, born 'on a rain drenched afternoon in 2003 in Seattle' excel in a spooked psych folk that is evocative of the dark, rustic and sodden beauty of the projects landscape. "There's Nobody Hiding Under The Gorse Bush" is truly haunting, and comes from deep within those endless forests. You will not want to miss this.

The album begins with 'The Dead Birdman Falls Off His Tightrope', delicate acoustic guitars framing trickling, twinkling piano and Jo's unnatural but captivating ghostly vocals. Reminiscent of some of the more baroque and spectral work of Backworld and Richard Moult this is a breathtaking and luminescent opening to the album. Next, 'The Demon Lover' is a brief, slide guitar soaked slice of melancholy, Jo's vocals echoing as if in the deepest and darkest of valleys. Although pursuing a more stripped back and wraith-like approach, Empty Vessel Music will be much appreciated by those who favour the music of fellow psych folksters Espers, Sharron Kraus, Faun Fables and Stone Breath. 'Tending The Flock's accordion drips late night atmosphere as xylophone and piano shiver like stars on a cold, clear night. This music is hugely emotive, it blankets the listener in an air of reflection and a sense of quiet nostalgia that you cannot help but be moved by. 'The Dead Birdman Catches A Falling Star on His Frozen Tongue' introduces chamber styled woodwind to the acoustic guitar, Jo's reverberated vocals like a choir of ghosts. Much of this album is instrumental with Jo's voice another, crucial instrument used to create the enveloping and immersive mood of wintry, desolate woodlands. 'Her Prostitution's precise guitar notes, intense finger picking and floating, hazy and doomed vocals conjure up the type of backwoods seen in the first season of True Detective and reminds this listener of the baroque psych of fellow traveller Arrowwood. 'Violet Wrapped Tissues' strips things back to piano and layered, echoed vocals to beautiful effect in a dusty, abandoned room of a song. Much of this album feels sepia in tone, there is the feeling of vintage times and memories gone by, of something remaining that is haunted and alone.

In contrast, 'The Unwanted Gift In Spring' emerges from the shadows, beginning with woodwind and a sprinkling of piano, akin to the first shards of sunlight of a new day. Accordion and a choral evocation of something being borne from the winter's gloom drifts alongside mysterious whispers and percussion to create something truly magical indeed. The rattling of percussion and insistent guitar heralds 'Climbing Into A Terrorist's Dream', sharp bowed notes and finger cymbals, Jo using her voice itself as percussion and as a soaring source of dread melody. Sounding not unlike some of the solo work of Dead Can Dance's Lisa Gerrard, this track startles and punctuates after the ghost like mists of previous songs. There is real power here. Penultimate track 'Yesterday Changed Everything' returns to quieter, sadder territory with accordion drones and recorder adding an acid folk sheen that recalls such classic 70's albums as Stone Angel's début, Oberon's 'A Midsummer Night Dream' and Nico's early, John Cale produced albums, 'The Marble Index' and 'Desertshore'. This album is that good, trust me. Finally, 'His Last Supper' opens with birdsong and the drift of keyboards, Jo's vocals incanting to the winds. Not just unearthly sounding but supernatural, this is a symphony of hedgewitches, of the dark heart of the woods brought to song. It is an incredibly memorable and heart stopping conclusion.

There is a definite sense of something arising from the forests in America that is not unlike a parallel to the new psych folk movement here in the UK spearheaded by the likes of United Bible Studies, The Owl Service and the Weirdshire collective of Sproatly Smith, Sedayne and Alula Down. Although disparate and unconnected personally there is a common vein of haunted rustic folk emerging Stateside from Stone Breath, Novemthree and Arrowwood and Empty Vessel Music. This is music for those times outdoors were the wind is whispering through the trees and you can swear you hear voices. A quiet triumph of an album, 'There's Nobody Hiding Under The Gorse Bush' is essential listening.

Available now on CD (and download) below, with the beautiful and thoughtful packaging that has become associated with the Wild Silence label.