The Seventh Ring of Saturn "Ormythology" 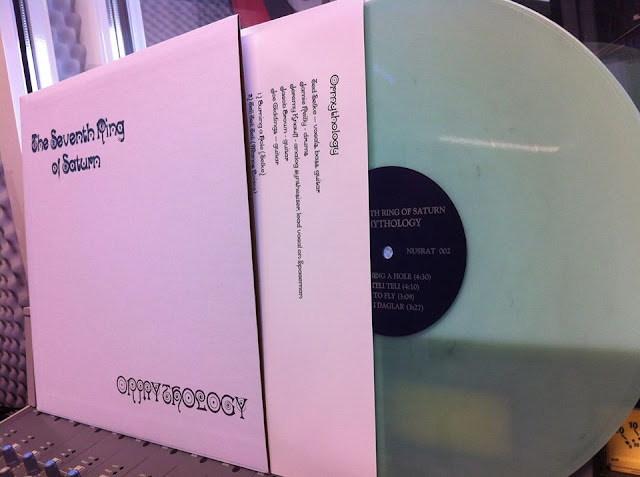 The Seventh Ring of Saturn's previous, self-titled album fell into my lap courtesy of Fruits de Mer Records' Keith Jones. It wasn't a Fruits de Mer release, but Keith was sufficiently impressed to feel I should hear it, and he was right. Unfortunately with a release date of 2007 it was far too old for me to review for you. Nonetheless, I contacted TSROS's Ted Selke to attempt to negotiate a digital reissue through the Active Listener Records imprint, but Ted was gracious but firm; TSROS had come a long way, and were working up new material which would offer a far more accurate representation of what TSROS was really all about, and that was Ted's primary focus. Interpreting this as Ted's way of saying that he thinks that the self-titled album (which I think is absolutely fantastic) is not up to scratch left me extremely curious as to what this new material was going to be like.

Which brings us to "Ormythology", the culmination of years of work for Selke and co.

Like the debut, "Ormythology" is a mixture of originals and covers. The two Selke penned numbers "Burning a Hole" and "Time to Fly" are among the strongest tracks here, especially the former, which has the subtle melodicism of the Green Pajamas, but is much more deeply lysergic than anything they've turned their hand to since the mid eighties. I'd love to hear more originals on the next release, if these are anything to go on.

The covers are great too, mind. Bypassing safe selections, the six covers are an esoteric mixture that take in everything from Turkish and Greek folk and pop to Danish and American garage. If you weren't familiar with the originals however, you'd be hard pressed to notice that they weren't the band's own songs, so well do they put their own stamp on them. Exotic instrumentals "Teli Teli Teli" and Erkin Koray’s "Karli Dagger" are given exciting makeovers that fuse Eastern scales with Western psychedelia perfectly. The T.C Atlantics' "Faces" gets given the TSROS treatment too, emerging from a swirling cloud of phasing to be reinvented as a moody psych ballad. And Danish heavy psych band Hurdy Gurdy's "Spaceman" is a much more muscular affair, with wailing guitar leads and crunchy power chords creating a lysergic storm. And then it's all over, leaving me very much wanting more.

Fortunately there is more; released concurrently is a 7" of much less esoteric covers - the Grateful Dead's "Mountains of the Moon" and the Hollies' "All the World is Love". The band's website seems to imply that these are solo recordings by Ted, but they're just as ornate as anything on the album - if a little more straightforward. And on lovely clear vinyl too.

Both releases are strictly limited, and come in lovely hand-stamped heavy card sleeves. Visit the band's website here for full streams of most of the tracks, and to find out how and where you can order these. (The album is available on CD and vinyl).