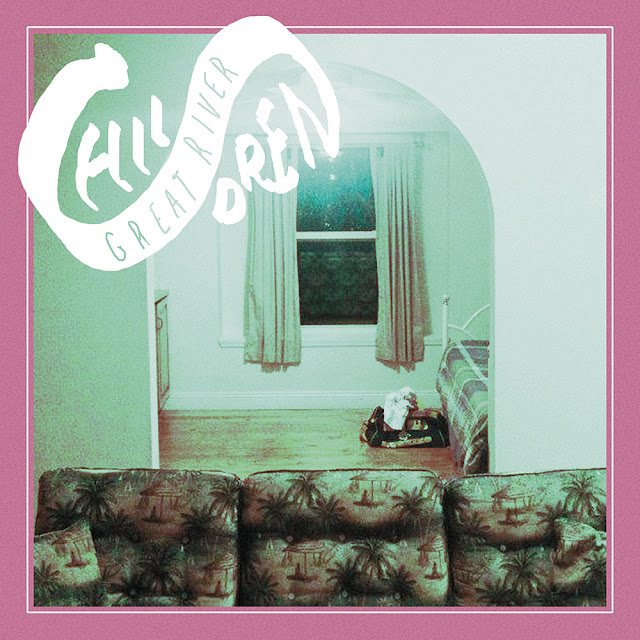 We all know that there's been a resurgence of interest in the music of the mid to late sixties, with a lot of bands channelling the vibes of those old records into a psychedelic music for the modern era, with the help of new technology. Children, a five man outfit from Los Angeles, is certainly one of those bands. "Great River," featured here, is their first album. It's available in a swanky gatefold CD digipack with some cool artwork, and also a limited cassette.

This is laid back, dreamy, smoke-filled music. Overall, it's a of mash of Byrdsy guitar jangle with lots of open spaces, and synthesizer/guitar-laden instrumental interludes. I'm also reminded of the slower, syrupy Vanilla Fudge, and pre-Blue Oyster Cult Stalk Forrest Group’s “California Album”. I enjoy the beachy-surf feel present at some points, with good compositional work, rhythms and chord changes. However it is way more progressive and engaging than simple surf/beach songs, and I feel these guys will really make their mark playing this stuff out on the road.

I'll mention a few of my favorite tracks on here. "Salamander", and "Doowaddadoo" (sung kinda like "Do What I Do") both highlight funky drum/surf guitar parts, and catchy in-between-verses riffs which leave plenty of spaces to jam in between. "Incantation" starts off with psychedelic keyboards, then drums, then guitar and the rest comes in. This layering is a nice touch and this is classic psych-surf, as I see it. "Don't Take All Night" reminds me a lot of Ariel Pink, as the reverb-y tones have that cold-ego-death, out of your body feel. There's a definite longing for strawberry fields like your good old late 60s favorites.

The album was recorded in Mississippi, which means "Great River" in the language of the local natives. I get the feeling these guys have been playing for awhile, as there is not only top notch musicianship here, but a definite chemistry present. Definitely a must hear if you are into progressive dream-surf, with a bluesy old school touch. And be sure to give this album time to sink in, as there is plenty happening below the surface for you to find during a late night headphone listen when it's quiet.