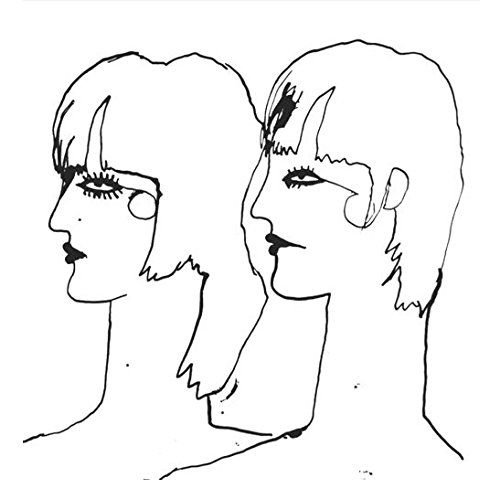 The press release states, “Drinks is a solo project, not a collaboration. It has… one mind and four legs.” Listening to the album, and hearing how little it sounds like either Cate Le Bon’s or Tim Presley’s previous work, the bizarre statement starts to make sense.

Le Bon’s distinctive, instantly recognizable sound comes thanks to her smoky, thickly accented voice, and her sinewy, disorienting guitar work. While, in his work with White Fence, Presley has proven himself a master of the nuances of classic psychedelic music, both as a producer and as a songwriter. But, as DRINKS, the two have blended—seemingly melded minds—to create a cohesive new sound that fans are not likely to be able to attribute to either artist.

Opening track, “Laying Down the Rock” kicks off with a simple, slightly odd Le Bon riff, before Presley’s affected English accent pipes in, sounding like Syd Barrett wandered into the wrong recording studio. Some minimal percussion and an acoustic guitar try to push the song forward, while Le Bon’s staccato electric riffs gently nudge the whole thing slightly off its axis.

The energetic “Focus On the Street” follows, sounding like Television Personalities on a particularly drunk night.

Le Bon’s first lead vocal shows up on “Cannon Mouth,” pumped through a trem/oscillator to make her sound like Siri’s European cousin. A 1950s approximation of “Space Age Music” sets the scene, but not the kind of Space Age Music that would be played at a bachelor pad; more like pop music from outer space.

It’s oddball twist after whimsical turn as the album motors along, despite a couple of tracks flirting with or eclipsing the 6-minute mark. Each song has something to grab your attention, particularly the title track, with its woozy stop/start rhythms, evolving into something close to danceable, but not quite.

The most-arresting track has to be “Tim, Do I Like That Dog?” It’s pretty much nothing but a single fuzzed-out guitar, playing no melody in particular, over pounding toms, scattershot percussion, and a pulsating bass line as Cate periodically intones the title phrase, with varying inflections. Tim answers her once or twice, “I don’t know,” as Cate continues to puzzle over “that dog.” It’s 6 and a half minutes of insanity that shouldn’t hold your attention the way that it does, but somehow manages to do so on the strength of charm, alone.

By the time the album wraps up with “Time Between” (not the great Chris Hillman-penned Byrds song, but another seemingly tossed-off original), momentum is slipping and it’s just about to overstay its welcome. But then, the song ends and so does the album. Just in time.

There is a spontaneity here that is impossible to fake; one can hear ideas being developed as the tape rolls. And while it’s all a bit amateurish, it’s in the best possible way. This is music that is being made for the pure love of making music; loose, ragged, charming (there’s that word again), and alive.

"Hermits on Holiday" is available here (UK), or here (US).