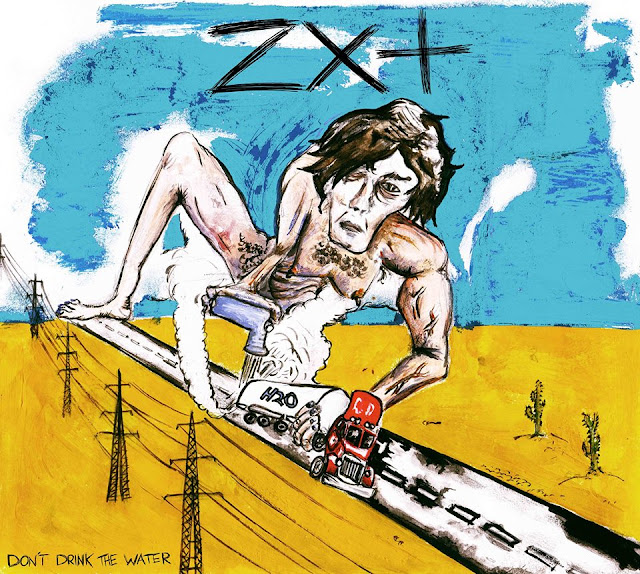 Now this was a very pleasant surprise. Arriving in the post unsolicited, this CD found its way into my CD player with me knowing exactly nothing about it or the artist involved, apart from a vague remembrance of there being some sort of a Fruits de Mer Records connection.

"Don't Drink the Water" as it turns out, might well be one of the best albums that I've heard this year. ZX+ is the one man band project of Stephen Evans, and on the evidence of this he's something of a British equivalent to Ty Segall, only with a much wider frame of influential reference. Short and to the point, Evans' songs are inventive and immaculately arranged without sacrificing his spirit of spontaneity. And the hooks are numerous, huge, and inescapible.

Opener "The Crazies" is a glammy powerpop juggernaut with a killer chorus - equal parts Ty Segall and Big Star. It's a winnning formula, and one that a hugely enjoyable album could be built upon, but Evans has a lot more going on in his head, and the rest of "Don't Drink the Water" traverses an admirable range of terrains, which mark this as the product of a hyperactive, creative mind that doesn't want to be chained down, but knows how to put it's own distinctive stamp on its creations.

There's not a weak track among its 13, but one of the highlights will give you an idea of what you're letting yourself in for, and demonstrate Evans' versatility; "The Desert" is an absolute scorcher, and sounds like a track that an alternate universe's Supergrass have unwisely left off "In It For The Money", only this Supergrass are also lovers of quirky spaghetti westerns and shoegaze. That's a lot of impressions to be left with from a song that's only a little over two minutes long, but that's what this album is going to do to you. And you'll find yourself humming its choruses for weeks afterwards. You've been warned.

This is one hugely talented songwriter.