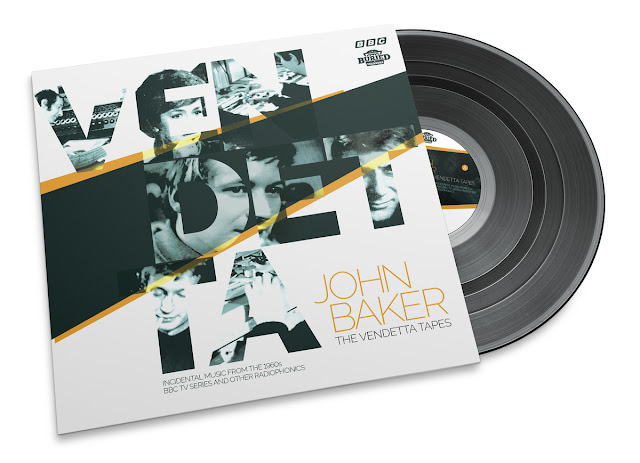 Trunk Records' revelatory collection "The John Baker Tapes" was a hugely important collection, drawing attention to one of the most important, but less celebrated members of the BBC Radiophonic Workshop. While other members of the Workshop were gifted technicians, Baker came from a musical background, and was able to master the tricky art of tape splicing, combining these two skills in a way that no other Workshop member was able to.

While working on "The John Baker Tapes", Alan Gubby discovered several reels of tape containing incidental music of Bakers from the 1960’s BBC TV series ‘Vendetta’ - a mafia themed cop thriller starring Italian actor Stelio Canelli. Best remembered now for its memorable John Barry theme tune, it's unlikely that many have heard the music contained on these tapes since their original broadcast, as many of the original episodes were junked by the BBC (as was common at the time).
Thrillingly, thanks to Gubby's efforts, we now get the opportunity to, thanks to this excellent release on his own Buried Treasure label.

Available on vinyl, or CD with ten extra tracks, "The Vendetta Tapes" is a fabulous artifact from a time when it was possible to ignore the boundaries between genres, and exciting new creations were a daily event (or so it seems in hindsight from someone who wasn't around at the time).

Baker's tape loop alchemy is at its best here, with weird droning soundscapes sounding like they'd be better suited to a spooky sci-fi making an immediate impression, but there's much more to "The Vendetta Tapes" than this alone. The majority of tracks feature live jazz instrumentation - live drums, flutes, saxophone, and possibly double bass (although I wouldn't put it past Baker to have been able to synthesize this somehow). The resultant blend of spooky electronically treated drones, and hepcat cool-jazz is seamless, and truly one of its kind.

The wind instruments take flight in swinging cues intended for chase sequences and action scenes, but "The Vendetta Tapes" is at its most revolutionary when ramping up the tension with moody atmospherics that rely equally on staccato electronic stabs and ominous flutework.

This is a really great find - amazing to think that things like this still languish in the vaults. Time for someone to go digging again, to see what else they can find from this particularly fruitful period.