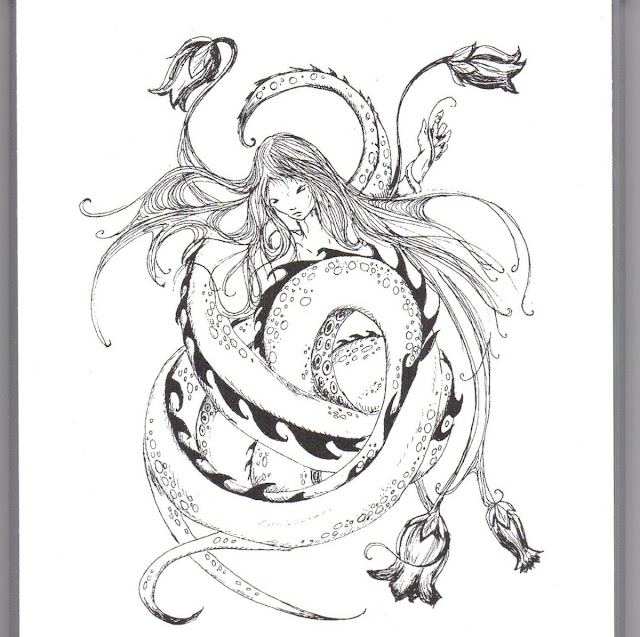 A hugely comprehensive and consistently superb compilation of all the existing material from wyrd folksters Belladonna Bouquet, this release has been a labour of love for label owner Roger Linney who has persevered over the course of years in sourcing and collating every last song of the bands that is still in audio existence. A double album running to an impressive forty-one tracks the collection spans from the now long lost debut cassette release 'Bile And Daffodils' to the remaining, existing tracks from their sophomore effort 'Scarlet Ceremonies' album to an unreleased third long player 'Wortcunning & Starcraft'. From the band Sarada Holt went on to become known as a part of Pennsylvania's Stone Breath and Jenne Micale as a solo artist under the name of Kwannon (and whose albums are well worth seeking out). This is a hugely impressive and historical release; for fans of psyche folk, in particular Stone Breath, this is required listening. Bewitching and beguiling, these songs curl around the listener like candle smoke.

The tracks from the debut release have their own distinct charm; slightly lo-fi yet filled with a dark, icily beautiful atmosphere and layers of ethereal vocals, chimes and echo it reminds this listener of the glorious heyday of the 4AD label, of artists such as Dead Can Dance, Xymox and This Mortal Coil. 'Anatha', for example, is a witches chant of layered vocals that is utterly spellbinding whilst 'Broken Skies' adds swirling, wailing synths and Xmal Deutschland attitude. 'In The Morning Glories' is a spectral nursery rhyme with a spoken word interlude that recalls Rose McDowall's work. Yet no-one quite sounds like Belladonna Bouquet, perhaps due to having two artists of such singular vision and creative talent. One is struck by the sheer inventiveness at work here; flanged vocals, layered harmonies, otherworldly percussion, acoustic reverie, all wrapped in shades of gothic psychedelia.

The 'Scarlet Ceremony' album, professionally produced, shines further dark and light into the strange and wondrous world of the Belladonnas. 'Nuit and Geb' is an accordion backed dreamscape of Eastern tinged vocal harmonies and shadowy acid folk whilst 'She Sits Upon Hedges' adds ominous strings and vintage keyboard squalls with a pulsating bassline to frame quite the strangest and most macabre tale you will hear. 'As Dark As Her Eyes' adds a Banshees sheen with flanged guitar underlying some truly incredible vocal performances, whilst 'What The Thrush Said' introduces flute and mandolin to create a medieval madrigal of utter and sinister loveliness.

The third part of this illuminating and enthralling release finds Belladonna Bouquet as a threesome as Kim Nickisher joined to play djembe and bass on the previously unreleased 'Worcunning & Starcraft'. You can hear the band developing over the scope of these three recordings but the sheer sense of musical exploration and creativeness (and unearthliness) remains a constant. Belladonna Bouquet were to split before it's completion and this album gives an insight into what was lost and what could have been; it is a startling and incredible piece of work. Containing elements of experimental, goth, psych, medieval and ethereal music this is essential listening for fans of Miranda Sex Garden, Kate Bush, the afore mentioned Dead Can Dance and Katherine Blake's work. 'Los Parades' is a highly effective dulcimer backed piece of gothic plainsong whilst 'House Of Peace' adds the sound of water to its mystical baroque melodies to create a music quite unlike anything else. 'Dreams' is a ritualistic, percussion led procession, finger cymbals counting time as the band create a universe of sound that is entirely their own. One can only wonder where the band would have gone next, what reveries they would have produced had they remained together.

Available now with beautiful artwork provided by Sarada this is an incredibly impressive and immersive release. You can lose yourself in the spellcasting and incantations of the band almost indefinitely, such is the power and beauty of this music. A very welcome release of true hidden treasure, let yourself become bewitched amongst the black flowers of Belladonna Bouquet.