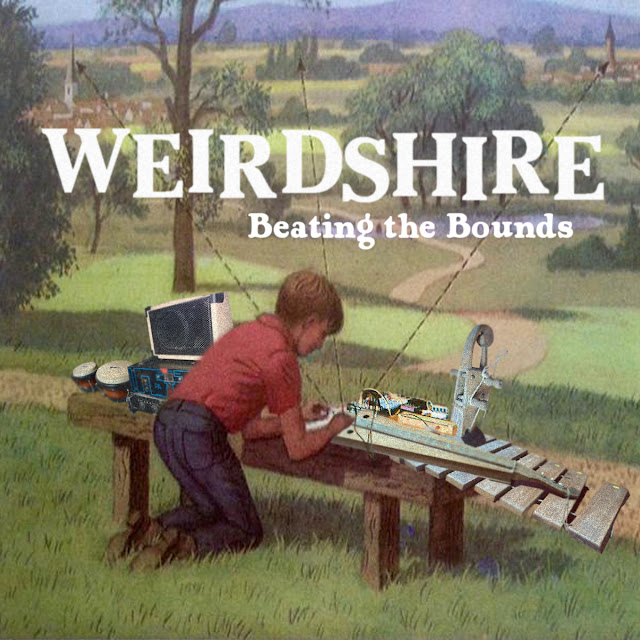 A treasure trove of psych-folk gems, 'Weirdshire...Beating The Bounds' is brought to you by acid folk masters Sproatly Smith, who have compiled the best and strangest of their local Herefordshire contemporaries into one grand guignol of the wyrd and the wonderful. As is stated on their bandcamp page; 'Weirdshire? Well, of course it is. If you don’t know that, you must have been born in Herefordshire and therefore think everywhere else is weird…'

The first thing to note is the sheer wealth and breadth of talent on display for such a confined geographical area; there must be something in the waters down there, something in the air, the ale or the fields which has resulted in a track listing that includes Sproatly Smith themselves (if you haven't encountered their magical ruralism and unique take on psych folk before you are in for an incredible treat), two songs from the bardic Sedayne (again seek his superb albums out for a clear view of the direction where true folk music is heading), highly recommended folk brut act Heed The Thunder and the ethereal and bewitching Alula Down (both featuring various Sproatly members).

Sproatly Smith's 'The Raven's Song' is a lysergic, haunted drone filled with twisted acoustic melodies, field recordings and spectral vocals; listening to this is enough to place a chill in the air. Vintage synths bubble and drift across the track's finale, further adding a sense of the uncanny. Smith accomplice Mark Stevenson presents a solo woodwind piece entitled 'Strangeness' that embodies the term 'folk horror' and reminds this listener of the intro to Black Widow's infernal 'Come To The Sabbat'. Sedayne offers both the ghostly refrain of 'Gentle Sisterhood' which opens the album and the closing 'Blackthorn Feral' which utilises vintage radio recordings of local traditions and as a precursor to some raga infused analogue keyboard meditations. It is hugely impressive and also quite unexpected, in keeping with the wyrd theme of this album. We are as far here from Mumford and Sons territory as it is possible to get, and a good thing too. Heed The Thunder's 'Green Man' is a bucolic mix of xylophone and mandolin, gentle percussion entering to create an atmosphere not unlike if Oliver Postgate and Vernon Elliot had conceived the score to The Wicker Man; this is a stand out track amongst some very fine company indeed. Alula Down's 'Hereford Garden Dreaming' enters upon birdsong and delicate acoustics before Kate Gathercole's spellbinding vocals transport the listener to another time completely, to an eternal spring.

Other Hereford artists also add to this rustic and heady brew. Andrew Skellam's 'Green Moat' is reflective, violin flecked stately folk of the highest order whilst Tobion/ Bird Radio again use local radio recordings to map a psychogeographical time and place before Peter Hammill-esque vocal harmonies present a dramatic and engaging folk tale abetted by crashes of gong and sinister piano sprinkles. Ria's 'Vampire Lullaby' is a fragile, gothic slice of classic psych folk whilst Aspel Orchard's music box and toy piano based 'Fledging Song' is a revelation, a shanty of ghosts and overgrown paths that begs further investigation into their back catalogue. Elspeth Anne uses rasping organ drones to frame her defiant and doomed folk lament; again further searching to find more songs by these artists is a necessity and isn't that what the best compilations do? They can be a casket of previously unknown and hidden gemstones that lead to lifelong allegiances with newly discovered acts and bands. Weirdshire certainly falls into this category and then some. Milkteeth use unaccompanied group vocals to splendid effect in a deeply eerie and dark 'The River' whilst Lol Roberston's heartrending 'Lucy's Song' is a superior piece of smoky, autumnal nostalgia. Vaginapocalypse's 'The Witches' is an unnerving jig that is absolutely entrancing and Footdragger's virtuoso guitar and Baby Dee style vocals make for a unique and winning formula in his 'Spires To Sticks'. Finally, David Roberts string soaked, tabla led acoustic voyaging and hushed vocals evoke shades of Nick Drake and misty autumn afternoons.

Weirdshire then is not just a place with geographical boundaries and features, with its local traditions and its own peculiar ways. It is also a frame of mind, a shared collective spirit that is just slightly off kilter in comparison to the outside world. This is what makes it special and what makes this album essential. They welcome visitors I hear, just as long as they aren't Christian coppers from the mainland…