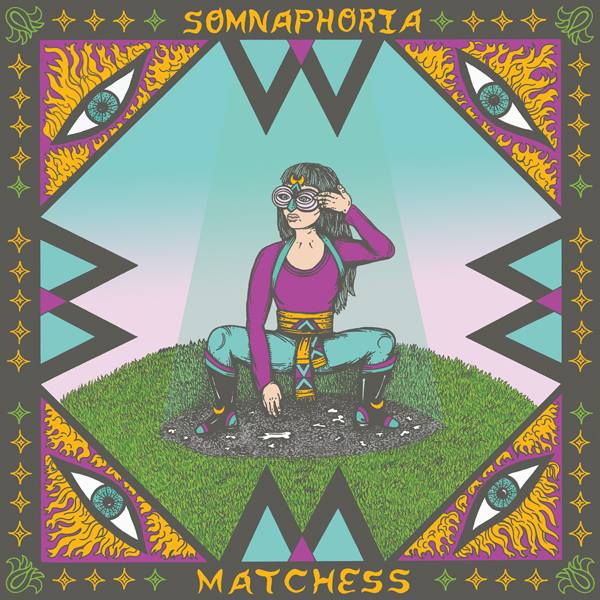 If you've never heard of Matchess, here's a bit of an introduction. Matchess is the solo project of Chicago musician Whitney Johnson, whom you may know from Verma or E+. If you've not heard of either, they're worth the excursion. From an outsider’s perspective, Chicago’s music scene seems to be one of the most active in America – and if not “active” then cultivated, pure, and vibrant. I can only imagine the quality bands that have not made it out of the area yet. Verma’s “Sunrunner” is still a favorite of this reviewer, so it wasn’t long before I discovered Johnson’s first release, 2013’s “Seraphastra.” Like "Seraphastra," "Somnaphoria" - released by Trouble in Mind Records earlier this summer - blends elements of classical viola arrangement, drone, and primitive electronica into a mesmerizing cocktail of strangely beautiful and otherworldly records. "Somnaphoria" is the next installation in Johnson's proposed trilogy, so, presumably, we'll get more subtle exploration and experimentation that wrangles the physicality of a bowed viola with the constant whir of an organ.

This time around, Johnson cites symbolist poetry as her influence, name checking Verlaine, Rimbaud and Baudelaire, whose imagery and invention must prove difficult – for most musicians – to translate sonically, but Johnson’s instruments, tones, and aesthetics of choice have a way of alluding to the same balance those poets achieved, namely melding the harsh, cold voices of mechanical oscillations and whirs with the very human, emotive viola. Mysteriously, Johnson’s voice – arguably the most organic of her line up – hovers somewhere in between, deeply altered by any number of pedals and processors but still remaining unique and feeling. The effect is powerful. As opening track, "So Many Fetters," begins with a cascade of chimes, so we, as listeners, are ushered into a sort of dreamland.

Layered, complex drones intermingle over pulses and tones. However, with tracks like "Sinister Prophecies of Coming Catastrophes" to provide somber and moving interludes, the otherwise continual drones remain hypnotic.

“Somnaphoria” is available here (US), and here (UK/EU).