United Bible Studies "So As to Preserve The Mystery" 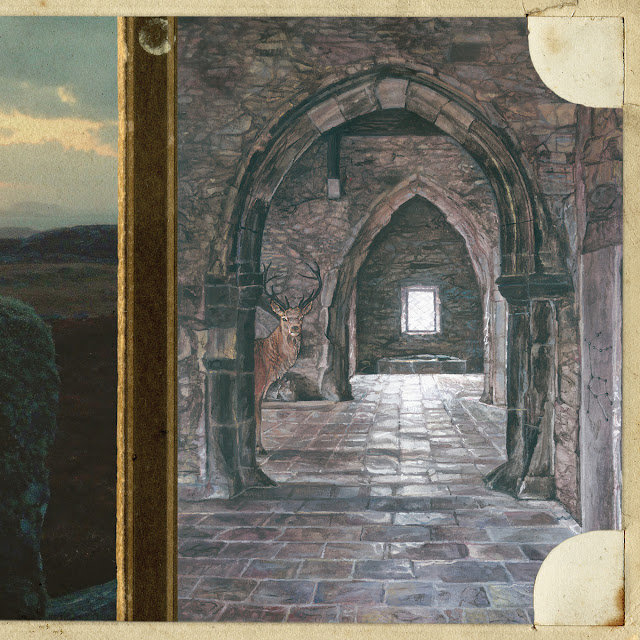 It is always a cause for celebration when wyrd folk collective United Bible Studies release a new album and 'So As To Preserve The Mystery' is indeed a recording that is a veritable gift for the listener. With a back catalogue of silver flecked gems already in their wake (such as 2014's 'Doineann' and 'Spoicke', or 2009's 'The Jonah') this new album continues the outfit's pursuit of rough hewn beauty and windswept otherworldliness. The collective this time around include some well known names from the experimental and folk worlds such as Michael Tanner (also of Plinth), David Colohan (also of Raising Holy Sparks), Richard Moult, Alison O'Donnell (Mellow Candle/The Owl Service) and Áine O'Dwyer, whose solo album 'Anything Bright or Startling' (search it out) is one of the most stunning releases of the last few years. Recorded between Ireland, the Western Isles of Scotland and the south coast of England 'So As To Preserve The Mystery' is an album that sings of the landscape, the elements and of the vast skies above.

Opener 'Tossing The Daisies' is a shimmering sunset of a song, gentle rattles of guitar and hushed cymbals holding the tension behind Alison O'Donnell's spectral vocals. Strings and piano emerge but their strength is in restraint, the song is perfection in its glacial and spooked simplicity. Next, 'The Place Of Bays' introduces O'Dwyer's harp, soft washes of keyboard and Colohan's distinctive and evocative vocals. Orchestral swells and an unearthly choir build and peak until analogue keyboards gradually fade the track out; this heartbreaking and wind torn lament is undoubtedly one of the highlights of the album. Indeed, this is music that has more ambition, emotion and creative blood in its ancient veins than just about any other act at work today; trust me, you must hear this. 'Teampall Mholuaidh' returns O'Donnell to vocal duties accompanied by the haunted harmonies of Aine O'Dwyer (who adds a wonderful ghostly sheen to a number of tracks), layered psych guitar, choral strings and cascading harp. Like watching a storm out at sea this feels both equally thrillingly stirring and shiver inducing. 'Deireadh Fomhair' is a mellotron and string soaked quiet howl into the horizon, harp and piano glistening across sombre drones as the wind begins to whistle and sweep around the music itself. These are sounds that will break your heart. 'Winistre' begins with the sound of church bells and bowed strings before the buzz and hum of guitars and bouzouki enter, the maelstrom growing like a swarm of swallows around the gentle acoustic plucking. Tension is raised and released and raised again, as if on the swell of the waves or on the wind itself. Mixed male vocals begin a folk rhyme as the swell recedes, reminding us that at its heart this is traditional (albeit experimental) music, until the strings and guitar come crashing in in a heart stopping moment of sheer perfection.'An Gort Gan Geata' is more reflective and hushed, Colohan's voice framed by icy, twinkling drones and flute, evoking something of a longing, of places remembered and known. This segues into 'Islands', a wintry ballad that builds upon layers of keyboard and dramatic string stabs before the light begins to fall to dusk and a wash of warm, shimmering, silvery drones cover all that is there. It is absolutely breath taking.

The album is described as 'in support of heartfelt paeans to nameless gods, apocalyptic requiems for the new/old world, and an overwhelming sense of wonder at the natural beauty of Éire and the Western Isles' and it succeeds admirably in its quest. Quite simply this is one of the best albums I've heard not just this year but in a long while. A beautiful sadness and nostalgia permeates the album and it is an incredibly powerful listen, despite its relative finesse and gentleness. There are not many acts who can conjure such wild, open landscapes in their music, with such emotive impact and sensitivity, yet United Bible Studies do this time and again. Essential.

Available now on CD at the Deep Water Acres website with beautiful artwork and photography by Richard Moult adorning the sleeve.