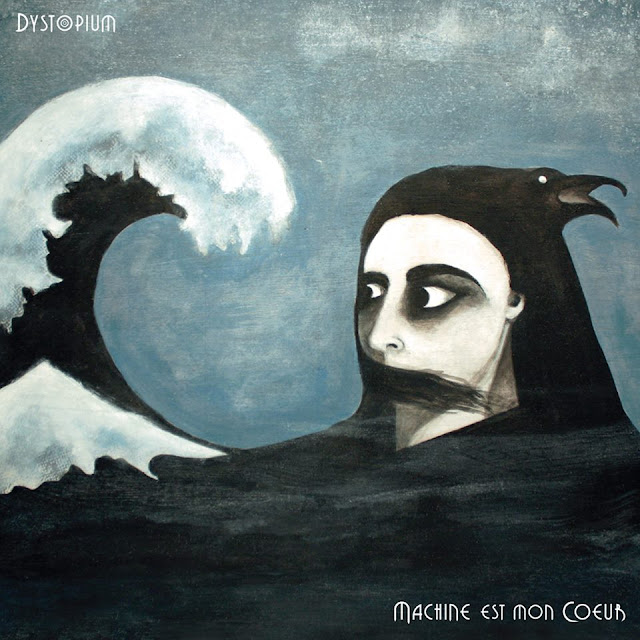 Machine est mon Coeur (roughly translated: "the machine is my heart") inhabit an appealingly moody world on their debut album. The duo of Australian Bianca Calandra and Frenchman Gabin Lopez seemed destined to work together after coincidental meetings in both Sydney and Berlin. And so it was that they took fate's hint and decamped to a French country house where "Dystopium" was written, rehearsed and recorded. Despite this idyllic setting "Dystopium" (Dystopia + Opium) sounds very much like the product of a bleak, grey, urban environment. "Lo-fi concrete dark-pop for lovers, dreamers and somnambulists" is how they choose to describe their music, and while that seems to cover an awful lot of bases,they're all here, and more besides.

There's a great analogue feeling to the whole album, with songs built around Calandra's compelling vocals, with Lopez's piano figures hinting at the starkness and simplicity of Portishead's self titled sophomore effort. But where Portishead flavoured their music with down tempo club music, and well placed John Barryisms, Machine est mon Coeur mine a rich vein of vintage psychedelia and kosmische for their textural colours. Witness "Trainwreck", which makes haunting use of squalling seagull guitars ala Pink Floyd's "Echoes", adding resonance and depth.

They've also realised that there's huge potential for what they do beyond their music alone. With this in mind they've cultivated a carefully constructed audio-visual presence with their music, sleeve art, and video clips adding up to a mystique that is much, much more than the sum of its impressive individual parts.

The clip for "Beam of Fire" will give you an idea of where they're coming from, and acts as a perfect introduction to a highly recommended album which, at 31 minutes, leaves the listener wanting more.

CD and digital both available here: