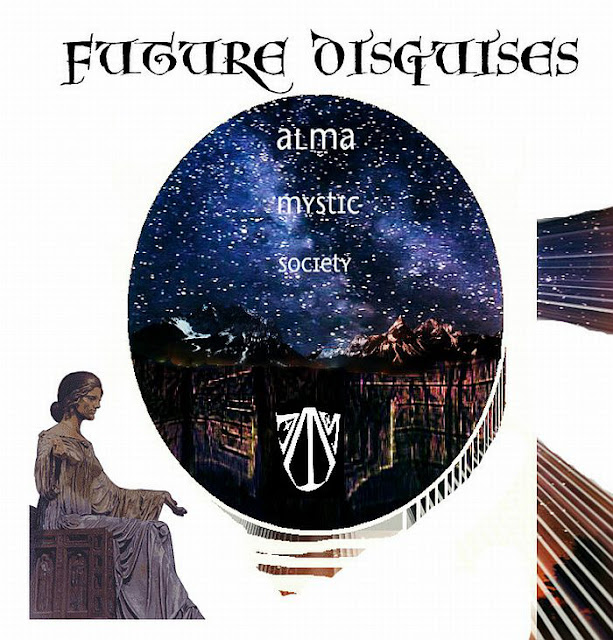 The début album by Future Disguises (aka multi instrumentalist Brian Ruark) emerges from the shadows of previous tantalising snippets posted on soundcloud. This full length opus is at turns ambitious, mysterious and utterly immersive, shape shifting from dark electronica to folk tinged psych to Floydian atmospherics. One thing is certain however; this needs to be heard.

Opener 'Alma 01' has shades of Angelo Badalamenti's 'Twin Peaks' soundtrack in its hazy, disconcerting keyboard drift and drone, a woman's voice intoning 'look away' over glitchy percussion before a disembodied voice asks 'is there a hidden dimension that swallows up the unwary traveller?' as electronic strings swell and rise into a 'Saucerful Of Secrets' style vintage keyboard odyssey. The question could indeed be equally asked of this absorbing album and its listener. Reminiscent of some of Nurse With Wound's more ambient (but still disturbing) work this is an epic and pleasingly disorientating Through The Looking Glass dark dreamscape. Next 'Alma 02' begins with acoustic guitar and an angelic choir both pastoral and soothing, before echoed electronic percussion and disconcerting waves of keyboards enter to spread a tension and drama that fully engages; although frequently instrumental this is not background music by any stretch of the imagination. Instead the album is by turns captivating, descriptive and unsettling. As an example, within this song a cacophony of voices and static then leads into a spooked piano melody accompanied by graceful woodwind. This is music best listened to on the darkest of nights and with headphones; it takes you on its own demented journey to corners of the psyche previously unvisited or dreamt of.

'Concord' is a guitar led symphony of samples, violin, vintage keyboards and barely restrained tension and melancholy; the likes of Thom Yorke would be proud of such a composition. For this particular track Ruark adds his vocals which blend seamlessly with the music into one pulsating and driving whole. 'Ampersand' is an ever growing and building crescendo of shimmering guitar and choral vocals whilst 'Squid Have Teeth Like Old Men' adds reversed percussion and electric hum to an off kilter keyboard melody to create a piece of unsettling, twisted electronica that puts this listener in mind of Aphex twin and Squarepusher. 'Mercurial Pills' reintroduces Ruark's vocals accompanied by those of Kimberly Ruark in one of the most conventional, but no less lovely, compositions on the album. Strident drums and guitars push this track towards the anthemic; it is both stirring and absorbing.

Further explorations into shadowy, psychedelically tinged electronics ('Cola Hyllings Learns A New Spellcasting Technique' and 'Love Me Tinder') sit equally successfully beside tracks layered with violin and electric guitar ('Also Rans' with it's crunchy, Black Sabbath-esque riffs and wraith like vocals is superbly sinister and 'A Tribute To Tragedies' slips from unnerving synthesized surrealism to tidal waves of Godspeed You Black Emperor styled majestic guitar). 'Accidental Char' is like stepping into a David Lynch film, all floaty and woozy discombulation, accompanied by Kimberly Ruark's haunted vocals and disturbing snatches of sampled dialogue. 'Stille Voices' drum click echoes like distant, approaching footsteps and its tense synth lines and vocal incantations culminate in a melancholy, hypnagogic grandeur. Following tracks 'Greetings To Thee' and 'A Day Of Beasts' respectively provide quiet, glistening beauty and a dramatic soundtrack that would fit one of Ben Wheatley's queasily brilliant movies. 'Late In The Day Courtships' and finale ' Spooky Midnight Dream Hop' again both evoke a dream state; samples of voices and Kimberly Ruark's whispers and singing (which must receive a special mention; her contribution provides a ghostly acid folk element that is utterly bewitching) adding a sense that all is not right, that we are not in the usual, known and predictable world here.

This is a startlingly inventive and creative recording. There are countless ideas and twist and turns yet it all feels seamless and, crucially, it has a strong emotive impact that is only added to, not lessened, by its experimental tendencies. Highly recommended; albums of this ambition, depth and quality do not appear that often. Come join the Alma Mystic Society.

Available now on the ever fine Reverb Worship label with individually handmade sleeves and CD labels (each label unique and designed by Ruark) as well as a badge. Strictly limited to forty copies so don't delay; copies are shared and available between the label and Ruark himself at the Future Disguises Bandcamp page (through the sreaming link below).