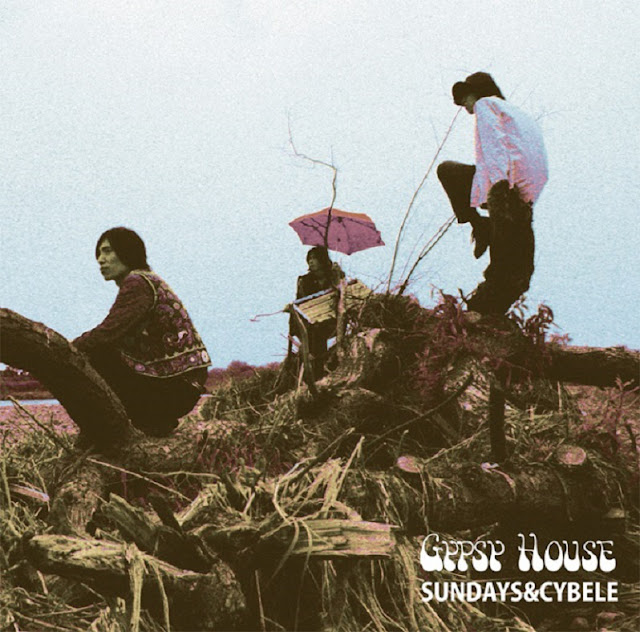 Joe had plenty of positive things to say about Sundays & Cybele's latest Beyond Beyond is Beyond album "Heaven" a couple of weeks ago, and now this fresh vinyl reissue of their 2012 opus "Gypsy House" from Japanese label Guruguru Brain gives us a chance to delve a little further back into their back history, and unearth an album every bit as worthwhile as "Heaven", not to mention completely different.

While the Sundays & Cybele of today is a very contemporary creature, integrating influences from both the then, and the now, "Gypsy House" reveals a band revelling in the trappings of the late sixties to the extent that it could quite convincingly be passed off as an artifact from that time.

Group leader Kazuo Tsubouchi has stated in interviews that one of the main goals that he hopes to achieve through Sundays & Cybele's music is an increased awareness of classic Japanese psychedelia, and "Gypsy House" should certainly pique the curiosity of younger listeners, who haev yet to discover the delights of Blues Creation, Speed, Glue & Shinki and the likes. And likewise, listeners who are already fans of those artists will freak out when they hear this.
A six track release, trimmed down from a longer digital release, this more streamlined version of the album is a heavy psych-lovers dream, with an exremely pronounced Jimi Hendrix influence, which I've rarely heard done better, aside from the maestro himself of course. Led by Kazuo Tsubouch's inspired guitar work, these six tracks have an average running time of around seven minutes, but never show signs of floundering. It's rare to hear a record where the jamming is this focussed.
Tsubouchi's guitar takes the lead here, more often than the vocals even, with "Saint Song"s electric slide playing providing one of the album's most memorable riffs - think David Gilmour's playing on "One of these Days" given a kick in the pants.

Also extremely memorable is the lovely ballad "Into The Broken Seas Again", taking the Hendrix template set down by "Castles Made of Sand" and "Little Wing" and stretching it out in an appeallingly unhurried fashion with layers of backwards guitars, and some lovely lead work that chimes like a bell. Perhaps best of all though is "Waiting For You", a beautiful, and unlikely hybrid of "1983(... a Merman I Should Turn To Be)" with a chord sequence heavily indebted to "Dark Side of the Moon".  Rather than sounding derivative though, it presents itself as affectionate tribute, with lovely cascading guitar lines tying these two disparate strands together perfectly.

Psychedelic guitar lovers will be in absolute Heaven with this album. I can't recommend it highly enough.

And for those who are keen to investigate the contemporary Japanese psychedelic scene further, Guruguru Brain released this excellent, free compilation last year.