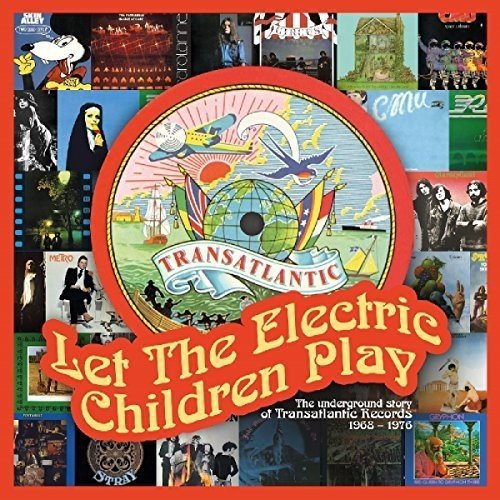 While it's primarily thought of these days as a folk label, an argument can be made that Transatlantic Records was one of the first and most influential underground rock labels too. Anyone wanting to present this argument would do well to have a copy of this new three CD box set on hand to silence any naysayers.

Nat Joseph originally started Transatlantic to license American jazz records on the Prestige and Riverside labels for UK release (hence the name Transatlantic I guess?). They then moved into sex education records before Joseph signed Bert Jansch and John Renbourn and started releasing ther records that they're remembered for today. Joseph continued to pursue other music that interested him however, releasing the Purple Gang's popular jug band psych hit "Granny Takes a Trip" in 1967, and within a few years he had an impressive range of underground acts on his roster.

"Let The Electric Children Play: The Underground Story of Transatlantic Records 1968-1976" focuses on these acts, with some crossover to some of his folk acts' more experimental material. There's some busy proto-prog from the ass-end of the sixties from Jody Grind and Circus as well as the Deviants representing the Ladbrook Grove scene, but things get really interesting amidst the offerings from the start of the next decade. The menacing prog-folk of Jan Dukes De Grey is represented by the title track from their second opus "Mice & Rats In The Loft" while highly rated prog rockers Marsupilami demonstrate their versatility on "Prelude to the Arena" from their excellent "Arena" LP. And while we're focusing on the progressive side of things, there are two excellent cuts each from CMU and Skin Alley. Elsewhere, there are very interesting experimental folk tracks from Mr Fox, whose "Mendle" is deeply sinister, as well as former Mr Fox vocalist Carolanne Pegg whose Transatlantic album "A Witch's Guide to the Underground" is a must hear.

There was more to Transatlantic's underground roll call than prog and folk though; there's McCartneyish pop from a pre-Stealer's Wheel Gerry Rafferty, hard rock from Stray, even a touch of glam from Metro, whose "Criminal World" (featured here) made enough of an impression on David Bowie for him to cover it on his zillion selling "Let's Dance" album.

It's a bargain and can be had here.