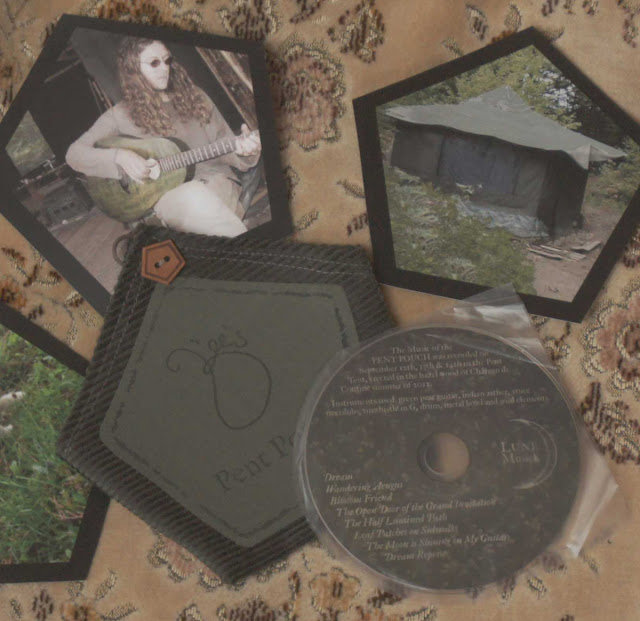 In Gowan Ring’s main man and wandering troubadour B'ee, whose artistic vision has borne countless masterful psych folk releases over the last two decades, returns with the curious and intriguing new release ‘Bee’s Pent Pouch’. Describing In Gowan Ring’s music as ‘symbolist folk; music within a magico-poetic-folk tradition utilizing acoustic instruments, voice, and poetry to convey transcendent experience and to engage the listener in mythic realities’, B’ee ably delivers here on both this promise and description. There is also a curious history to this release, recorded back in 2012 in a specially constructed five sided tent/ dwelling behind a 16th century French chateau. It was within this structure that B’ee determined to record a five sided sound project. The album, initially given to those who helped fund the project, now sees the light of day in a variety of five sided packaging options, from vinyl to a pouch or box encased CD.

'Dream' opens the album with a drifting sitar drone, a steady hand drum and an unsettling, otherworldly chant that layers and builds as if a choir of ghosts, ever increasing in number. It is both tranquil and eerie, the sound of darkness falling and of dusk; magical yet ominous. A fitting beginning, it is followed by an able cover of Donovan's 'Wandering Aengus', solitary voices and acoustic guitar proving a powerfully bare setting for Yeats’s lyrical and evocative words. Nick Drake's little known outtake 'Blossom Friend' is another acoustic treasure, a delicate and yearning slice of fragile, bucolic beauty. B'ee is past master of interpretation with such songs as these and he doesn't disappoint here; indeed he never over-elaborates but rather inhabits the song in its stark and simple sadness.

Next, ‘The Open Door Of The Grand Invitation' uses B'ee's warm and emotive vocals to significant effect both as a lead and also as a multi-layered choral backing, recollecting such seminal acid folk artists as Perry Leopold (especially his ‘Christian Lucifer’ period) or Simon Finn. 'The Half Lumined Path' starts with the sound of leaves underfoot and distant crow song before percussion and subtle drones enter, creating both a nature ritual and an effective field recording. A re-reading of the stunning 'Leaf Patches On Sidewalks’ (from B'ees 2005 'Beirth' album) is most welcome and absorbs a new potency and poignancy in its stripped back form. 'The Moon Is Shining On My Guitar' offers a lament from B'ees tormented troubadour soul, a melancholy sliver of wyrd folk magic where such is the intimacy that it almost feels that B'ee is in the room with you, the sound of him taking off his guitar at the end only adding to this sense of connection. The album closes with a reprise of the opening ‘Dream’, the drone darker, stronger and more urgent as the circling chants float in and out of consciousness.

A true gemstone of an album, this is B'ee at his most minimal and nakedly genuine; recorded with mostly just his voice and guitar it only emphasises his mastery of his muse and musick. One then for sunsets on hilltops, dusk by rivers or sunrises over woodland; this is music that connects with something innate in both the heart and with nature.