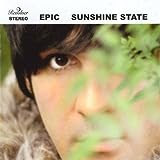 Of all the retro goldmines that have been plundered over the last ten years, mid sixties pop seems to have been unfairly neglected. While psychedelia and garage rock have seen massive revivals, sunshine pop has been largely bypassed. Which is why Epic's Sunshine State is such a pleasant surprise. While the obvious sixties touchstones of the Beatles, the Who and the Beach Boys are all present and accounted for, Epic also show an obvious Hollies influence.

This isn't just some sort of Jet-lite power pop with echoes of yesteryear however - this is a fullblown tribute to Epic frontman Michael Gagliano's love affair with the era, and sounds like a lost classic from London's swinging 1967 scene. Even the cover successfully evokes the era.
What really makes this stand out is the quality of the songcraft.  This plays like a greatest hits collection more than an album in it's own right - it's entirely plausible to imagine any one of these twelve tracks succeeding in the mid to late sixties U.K singles chart.
I'm Only Bleeding bristles with energy and singlehandedly trumps Kula Shaker's entire back catalogue at capturing the essence of  Revolver era Beatles - all subtle sitar drones, multitracked harmony vocals and backwards guitars.

Liar is a massive shoulda been coulda been hit in the making, with a huge chorus and one of the best backward guitar solos I've ever heard.
Dogs manages to combine the chiming 12 string Rickenbacker jangle of the Byrds with vintage merseybeat.
Car Sick is a drum heavy Tomorrow Never Knows style number with lots of trippy backwards tapes.
Pleasure Bus, an affectionate tribute to Magical Mystery Tour and Strawberry Fields Forever  presumably, is all mellotrons and sighing backing vocals.
The Man Who Broke in Half has a touch of the Bond theme about it with it's ambitious John Barry brass accompaniment and tense spy guitars.

Heath Insecurities Inc. is a clever pastiche of Taxman to round things off.
Impressively, apart from drums Michael Gagliano plays everything on the album himself.
He's released three albums as the Sails on the highly esteemed Rainbow Quartz label since this came out - all worth investigating as well, but this is his unimpeachable masterpiece.
Sunshine State is out of print unfortunately, but the good news is that the latest Sails album ' A Headful of Stars' contains nine of Sunshine State's twelve songs so you can still get hold of most of it that way. It's also worth checking Amazon.co.uk for used copies of Sunshine State. I got my copy for about three pounds. Money well spent.