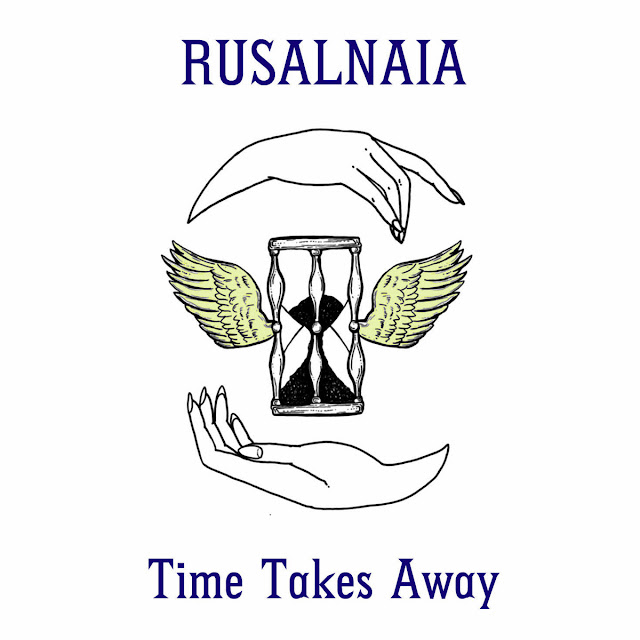 Rusalnaia combines the significant talents of both Sharron Kraus (who has already had a prolific run of essential albums in the last year with the gorgeous 'Friends And Enemies; Lovers And Strangers', its sister album 'Hen Llan Recordings’ and most recently the poetry/music of 'If You Put Out Your Hand') and Ex Reverie's Gillian Chadwick (if you haven't encountered 2008's 'The Door Into Summer' then I recommend you do so immediately). The previous Rusalnaia outing, their self-titled début, was a psych folk gem recorded with various members of Espers that left the listener spellbound, eagerly awaiting its follow up. 'Time Takes Away' may be eight years in the making but it is well worth any wait, indeed it surpasses the already high expectations held by those who follow the music of both Kraus, Chadwick and their work together.

The album begins with the creeping dread of 'Cast A Spell', a looping acoustic motif merging with hand drums and ever increasing chants to conjure a truly sacrificial Summerisle mood before scattering into a full blown psych guitar and violin dervish. At once both hugely powerful and hypnotic it is a shiver inducing opening to an album that then maintains its spellbinding hold upon the listener until the final fade out. 'Take Me Back' follows, Chadwick and Kraus's vocals mingling and weaving in and out of the others amidst the most unsettling array of analogue synths and pounding, ritualistic drums. Equal parts acid folk and full blown gothic psych (in the sense of such forerunners as Mellow Candle and Stone Angel) Rusalnaia display an (un)easy mastery of the wyrder angles and corners of folk; this music is in their blood, these incantations come from their very beings and are all the more affecting and alluring for this. 'Driving' is a case in point, its deceptively simple rhythmic pace is both beautiful and unsettling, a minor key entering and tilting the song into the darker shadows and more hidden, unusual places. Aficionados of Faun Fables, Espers and UK psych folkers Sproatly Smith and The Rowan Amber Mill will find much to love here.

The Pentangle-esque 'The Love I Want' introduces woodwind to its call and response folk majesty and is breathtaking in its steady but dramatic building and layering towards a bucolic and Bacchanalian finale. Next, 'The Beast' is transported on an intense and fiery flow of fuzz guitar and organ, both vocalist's lines intertwining as if recounting some twisted, unearthly nursery rhyme. Rusalnaia are no fey, rustic folk act, these songs scream, howl and haunt with intent; think early PJ Harvey meets the black hearted acid folk stylings of Comus. And when they quieten, they do so in a manner that gets under your skin to just the same extent, if not more so. 'The Honeymoon Is Over' is by turn a spectral and ghostly lament, solitary drumbeats punctuating a delicate but driven slice of melancholy perfection. 'Bright Things' casts its (book of) shadows gently but with a circling and cackling sense of expertly pitched melodrama. 'Lullaby (For A Future Generation)' meanwhile allows some sunlight in, organ and vocal harmonies combining to create a work of genuine emotive impact and beauty. All too soon the album reaches its finale with the title track, a recorder and organ filled wonder that stays with the listener long after the song has finished.

In short, 'Time Takes Away' is a triumph. It is no leap of the imagination to picture this album being played and revered in twenty year’s time in the same manner that we do with our copies of 'Basket Of Light', 'Swaddling Songs' or 'Commoners Crown'. This is a hugely accomplished and truly special recording; trust me, you need this album.

Available now on download from the band's Bandcamp page and as digipack CD from Cambrian Records.