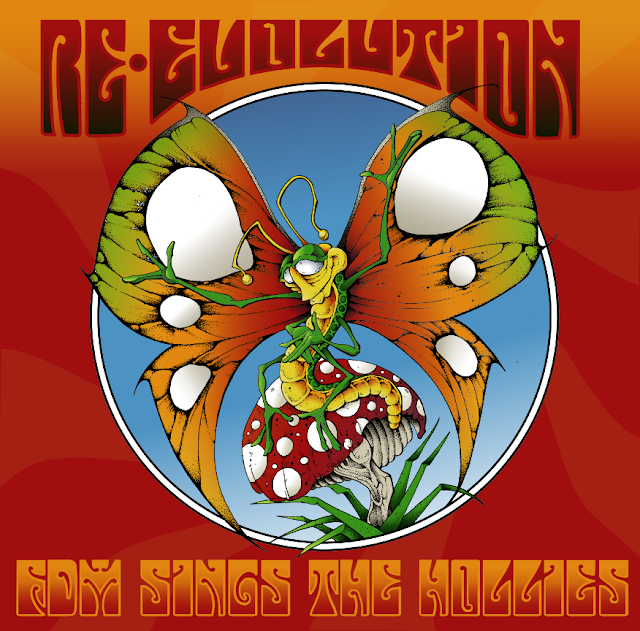 The nickname "The Manchester Beatles" was always going to be hard to live up to, and while the Hollies had a lot of luck commercially in the sixties, that success never seemed to cross over to widespread critical acclaim. Subsequently, their period of psychedelic experimentation from 1966-1968 hasn't received the recognition it perhaps deserves.
Fruits de Mer records are doing their bit to make this right with "Re-Evolution", a tribute album with songs all drawn originally from this period, and featuring  a number of familiar Fruits faces and a few new ones.
There's almost an unwritten law that tribute albums will be about 50/50 wheat and chaff and that pretty much everyone will disagree upon which tracks fit into which category, but by focusing on such a concise period and featuring such likeminded artists, Fruits de Mer have managed to bypass this generally impassable universal truth. In fact there's so much good stuff on offer here that they've had to add a 7" E.P to the LP to keep it all in.
It's a consistently adventurous and entertaining listen (it helps that the source material is psych-pop of the highest order), with very few acts taking the safe route, and the bigger the risks taken, the higher the dividends paid. To this end, moonweevil's instrumental space-dub version of "Bus Stop" really shouldn't work but is hugely entertaining. Same goes for Hi-Fiction Science's indescribable tribal reinterpretation of "King Midas In Reverse" which has a fantastic hypnotic pulse, and perhaps the finest vocal Maria Charles has yet delivered on a HFS release.
Other highlights include a splendid trippy version of "Try It" by Brookyn's psychedelic explorers Sky Picnic, whom I suspect could cover almost anything and make it sound like one of their own, and the Higher State whose take on "Don't Run & Hide" sounds like it's drifting out of an old transistor radio.
Add stalwarts like the Bevis Frond and a bunch of new psychedelic pioneers and the end result is something very rare - a tribute album that I suspect I'm going to play more often than the source material.

Fruits de Mer recognize that vinyl is king so this is a vinyl only release, with no digital or CD.You can order it here.

Check out Hi-Fiction Science's "King Midas in Reverse" here. Plenty of other tracks from this can be sampled on the individual artists Facebook and Soundcloud pages.