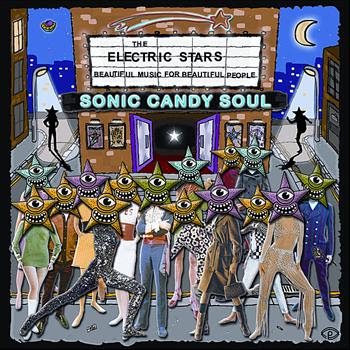 Manchester's Electric Stars obviously have wide ranging tastes and don't feel the need to pigeonhole themselves musically. Anything from the sixties, seventies and nineties seems to be fair game to this lot, and they do a pretty good job of assimilating a bunch of varied influences into a whole, which at first sounded pretty schizophonic to me, but started to make a lot more sense once I settled down to the business of listening for pleasure's sake, rather than working out how all these diverse influences fit together.
The band's most dominant characteristics are demonstrated right out of the gates with "136"s glam pop swagger which owes as much to the mid nineties glam revival of the likes of Suede as it does to it's original seventies counterparts.
Elsewhere there's traces of the faux-gospel of early seventies Rolling Stones on "Blind" - Primal Scream's "Screamadelica" would have a far more solid rep now if it had featured a few more lighter wavers of this quality.
"Bedtime Stories" on the otherhand has so much of the over the top drama and intrigue of a Bond theme that I was checking the fine print for an "arranged by David Arnold" credit.
Very nice stuff but it doesn't sound like something that belongs on the Active Listener does it?
Well guess again. There's a distinct whiff of patchouli in the air on a great deal of these tracks. "Alison Williams" is a delicate wee sixties style ballad which suggests some sort of unholy alliance between the Small Faces and Kula Shaker (at their most subtle), while "Not Man Enough" ups the tambourine quotient and adds a filthy wah wah riff that screams power trio.
Goodo then.