Slows Down "The Way Down Leering / On The Street" 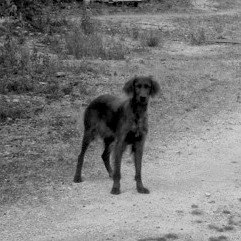 London based musician Alexander Hawthorne (also a member of Death Rays - worth checking out too), has created a huge, sweeping extravaganza of an opening statement with these two tracks. Taking advantage of the no compromise necessary freedom that only a true solo recording allows, as well as the opportunity to really sculpt the sound of these tracks with numerous overdubs and extremely careful manipulation, Hawthorne has created an extremely well defined world here - no mean feat, with only two tracks to do so in.

Opener "The Way Down Leering" is a grandiose, emotionally draining epic that sounds like someone threw Portishead's "Dummy" and Suede's "Dog Man Star" into a mixer and poured the resulting mixture into a Spacemen 3 shaped mold, with walls of guitars, enormous percussion and a killer theremin part that heads into all sorts of spooky territory that just won't quit.

"On The Street" is a little less frantic, but just as epic in its own way with guitar tones that again recall "Dog Man Star" era Bernard Butler, and a much more subtle, slow build approach that insinuates rather than outwardly states, and casts a widescreen vista that reaches a furious crescendo that feels like the rug's been pulled out from under you when it quickly ebbs away.

I'm usually a bit put out by debuts that only offer two tracks - they usually don't give the artist a chance to establish their personality or if they do, they often leave the listener wanting more, but these two tracks are an exhilarating and exhausting experience that if stretched out to album or even E.P length would most likely be too much to take.