EMI have announced today that they'll be releasing the new Smashing Pumpkins studio album, Oceania, on June 18. The album will appear on Billy Corgan's own label Martha's Music.
EMI Label Services's Mike Harris said: "We are thrilled to extend the long-term partnership between The Smashing Pumpkins and EMI with the release of 'Oceania'. Everybody at EMI is looking forward to working closely with Billy and the band to help them deliver their vision and their music to fans around the world."
Billy Corgan is insisting that the album is the best he's delivered since Mellon Collie in 1995, and word from industry insiders who have heard the finished work is also very positive.
The tracklisting for 'Oceania' is : 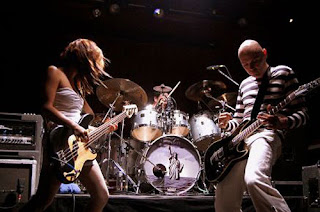 Check out a live performance clip of Quasar here: