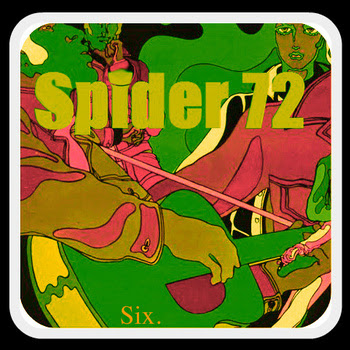 Spider 72 are a new one man band from the South of England, the work of one Byron Rimes which may well be the pseudonym for someone we know and love quite well already. I'm sure it'll come out sooner rather than later, but I'll not be the one to spill the beans.
As to what they sound like, the band's press release makes mention of the Super Furry Animals, and there are certainly traces of Gruff Rhys' welsh psych pop alchemists to be found in Spider 72's chemical makeup, especially with the willfully perverse mixing of genres which usually aren't even on speaking terms, in this case sunny sunshine pop harmonies with stomping glam rock riffs.
Their debut six track E.P is a steal for a fiver, and features a concise collection of melodious pop gems, delivered with the conviction of an LSD addled Buzzcocks.
They've also released a free two track single for those that require further coercion. Click the Spider 72 banner below to be taken to their bandcamp page for downloads.
Check out the E.P's opening track Devolution here :