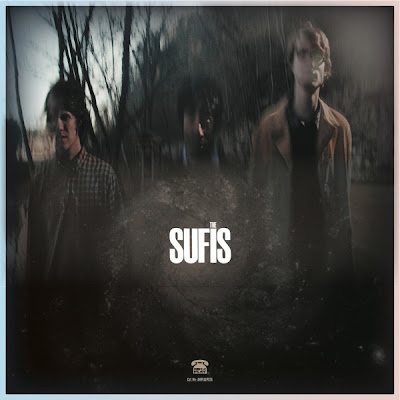 Simply put, The Sufi's self titled debut is so brilliant that I'm fairly certain that I can't formulate the words to do it justice. I will however give it a go.
Much like fellow Tennessee natives The Paperhead, the Sufis have an obvious fascination with the English music scene of the mid to late sixties.
Where the Paperhead evoke the sounds of more cult figures like July and the Idle Race, the Sufis seem to have set their sights much higher, and come across like a cross between the Beatles at their most mustachioed and Pink Floyd circa Arnold Layne.
Evocative, but never derivative, they channel their influences into concise and adventurous psychedelic pop tunes, the majority of which could have been hits in 1967 and with a little luck might be now.
Tjinder Singh from Cornershop spotted their promise right away and signed them to his Ample Play label, who are responsible for this attractive vinyl release.
"Sri Sai Flora"  is the track which has been serviced to media first, and is a good indicator of what to expect from their full length ; supple McCartneyesque basswork, drums which sound like they're struggling to catch up ala Ringo and dreamy harmonized vocals with a melody to kill for.
Elsewhere there's plenty of trippy Rick Wright style organ work, vocals run through oscilators and all manner of vintage sounding studio trickery - all married to perfect lysergic pop tunes, with the odd instrumental freakout thrown in for good measure.
Splendid stuff, and essential for those with a love of that innocent U.K sound that the Americans only now seem to be coming to grips with.