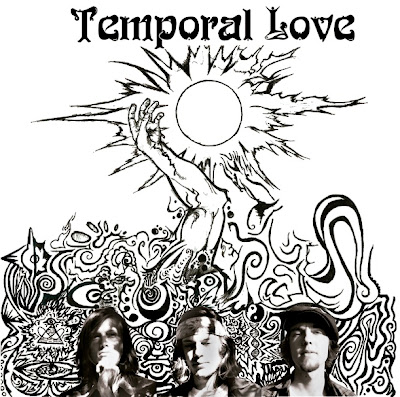 I'm in a pretty lucky position running this blog, getting sent music from all over the world by bands that realistically I would otherwise have never heard of.
What's even better is that occasionally what I get sent is as mind bogglingly good as Temporal Love's first album.
Where most new psych bands seem to be either cerebral, weird or garage punky (all of which are just fine by me), Temporal Love tap into a more timeless funky blues psych vein which would sound equally as at home in 1969 or amidst the grunge explosion of the early nineties as it does now.
If you can imagine what the Tea Party's first couple of albums would have sounded like had they been raised on Hendrix's Band of Gypsy's rather than Led Zeppelin II, you'll have a pretty good idea of what to expect here.
Heavy psychedelic blues rock with heaps of cool pentatonic riffs, wailing leads played through a wah-wah, very strong vocals which recall the Tea Party's Jeff Martin or a psychedelicized Jeff Healey, a solid rhythm section, smoking jams and some completely unexpected and totally fitting saxophone, all delivered by a talented young band who look like they should be co-headlining with Quicksilver Messenger Service at the Fillmore in 1969.
Highlights? The whole damn album pretty much, with "Rising Sun" being the track I'm finding myself humming inadvertently, with everything else a pretty close second.
Essential listening for those who like their psychedelia to have some soul.

It's coming out on vinyl real soon, and in the meantime you can download it here for a donation of your choosing.