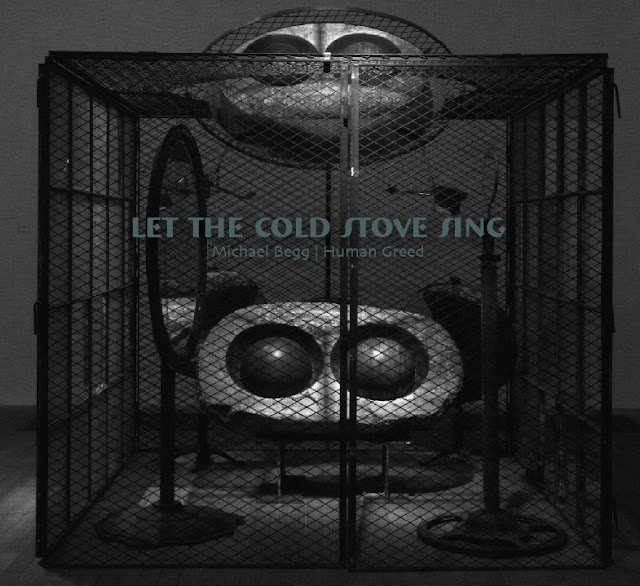 East Lothian based composer Michael Begg has quietly but steadfastly released (in this listener's humble opinion) some of the finest and most affecting albums of the last decade, such as 2008's dark and yearning 'Black Hill: Midnight At The Blighted Star', 2011's melancholic masterpiece 'Fortress Longing' and 2014's career best 'World Fair'. Along the way many noted and esteemed collaborators have added their voice or presence to proceedings such as Julia Kent (Antony And The Johnsons), David Tibet (Current 93), Chris Connelly (Ministry) and Clodagh Simonds (Mellow Candle, Fovea Hex). Working in the realm of drones, electronica and modern experimental composition to create vast, atmospheric and hugely evocative pieces of sound and melody, Begg has little in the way of contemporaries although aficionados of the windswept work of Richard Skelton, 'On Land'-era Eno, the dark soundscapes of Andrew Lilies and the classic recordings of Reich, Glass and Popol Vuh will find much to fall in love with here. Referencing both, according to Begg, 'gallery, theatre and installation works, as well as my preoccupation with defining space, place and time with sound' this is an essential and crucial work that needs to be heard and experienced.

The album begins with 'Hopetoun Tower Before The Harvest', named after a forbidding and lonely construction that stands defiantly on a hill near Begg's Captain's Quarters recording studio. As befits its namesake, the track rumbles with exposure to some building and growing winds as snakelike electronics creep and wisp into view. A beautiful and tentative string section enters, trembling emotively as bowed strings and bowls resonate. It feels sacred, like a storm has suddenly and dramatically silenced leaving a hushed and perceptible sense of being in the universe. The title track follows, piano and droned strings echoing out into darkness, both tangibly lonely and filled with a gorgeous sadness. There is something deeply existential about this work, one feels small in the face of the space and sounds that evoke the surrounding skies and landscape. 'The Children Will Wet The Academy Floor' adds some truly lovely chamber strings that reverberate and haunt, a spectral symphony of lamentation and grief whilst 'Paris is Closing' is a field recording of chatter and metro sounds that are pleasingly though disturbingly disorientating. Next, 'Pendrachin Wood: Pollen And Frost' is a frozen and glacial layered piece of orchestral electronica, reminiscent of Bowie's Berlin experiments; this literally lifts the hairs of one's arms and neck as it swells and recedes with visions of snow covered pines in the darkening Scottish winter afternoons. Human Greed are no simple drone or electronic act; these are carefully wrought and constructed compositions that evoke and emote in an almost avant classical sense. They are almost unique in working in this field and are creating pieces of heartbreaking genius that this listener implores you to discover and fall in love with; it is criminal that Begg is not more revered outside of the underground as the pioneer and composer that he is.

'Francis Bacon; A Room' is as complex and unsettling as the British artist himself, a corrosive drone and buzz hovering over the mutter of voices whist a sister song 'Louise Bourgeois: A Cell' allows chimes and electronic hums to flutter and slither malevolently throughout. 'Leisure In F' glides majestically into being, epic and choral strings ebbing and flowing until ominous notes and birdsong float into focus; reminiscent of charcoal skies passing by overhead with the threat of snowfall as nature and animal life reacts accordingly this is an incredibly moving and transportive piece. 'Made And Unmade In Europe' rasps and buzzes as a bird's lonesome call cries out against the imperious landscape, an unforgiving wind suddenly giving way to a soprano song and weeping strings in a genuinely breathtaking moment. 'Cunny For Thine Mountain Penne' almost silently emerges on delicate notes and drone sounds, distant percussion and mournful brass reminding this listener of Gorecki's 'Sorrowful Songs'. Stately, graceful and melancholic this regal and funereal piece stays with the listener long after the album has finished playing. Next, 'Intermission For Blisters And Russian Weddings' is driven along on wary and eerie violin bursts, a solar echo resonating and unfurling slowly and perceptibly whilst gentle bass notes hold anchor. This is music to play when the sky is huge, dark and forbidding, to watch the stars blink on and off with cosmic indifference to us watching.

'Studies In Space And Density' is equally massive in scale and suggestion; a cold, sad throb through the universe that becomes increasingly distorted and growling before returning to an icy, repeating refrain of solar wind. A sudden warmth enters with 'Let The Cold Stove Sing Within Reason' as a bass throb and beautiful melody grows and layers over a distant electronic howl and circling strings. Hugely affecting, there is an integral human component at the heart of everything Human Greed or Begg does, this is music about the human condition, about what it is to be in this casually cruel and beautiful universe. 'Whiteadder Water After The Harvest' brings us full circle and close the album with the burble of streams and rivers, metallic and windswept notes sweeping overhead.

I cannot recommend this album highly enough. There is more detail, more arresting and heart-rending moments, more creativity on this album than there is in some other artist's entire oeuvres. One for those lonely, late night listens or for accompaniment of solitary walks and dérives, 'Let The Cold Stove Sing' is a heartbreakingly beautiful and important album, perhaps quite easily already my album of the year. The cold stove is singing, now one must listen.

Available now as a download at Human Greed's Bandcamp site and as a CD.