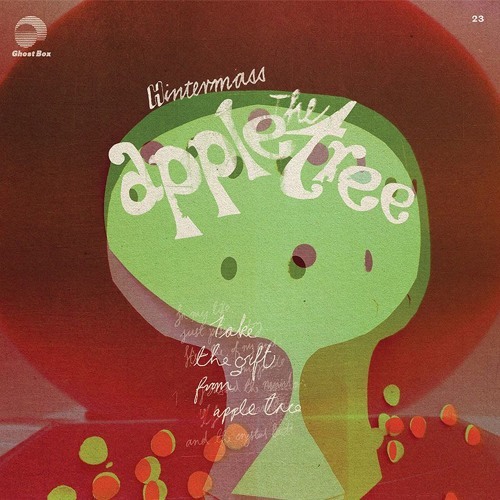 Ghost Box continue very much in the tradition with this latest offering from Hintermass, which is unsurprising given that it is the brainchild of Jon Brooks (the Advisory Circle) and Tim from the much missed pioneers Broadcast. Over its 12 tracks, ‘The Apple Tree’ is a blurry, warm-vibed record that perambulates gently on a rather whimsical axis. Nothing is hurried, nothing is jarring on the ear and the evocation generated is one of half-remembered and mostly pleasurable childhood dreams.

Everything appears to pivot on the strong title track which lopes along underpinned by a circular chord sequence, drifting synths, sparse percussion and gently intoned vocals that are a ringer for Gruff Rhys from the recently reactivated Super Furry Animals. The motif of the title track resurfaces periodically over the course of the release providing a suitable narrative for the other tracks that surround it. Sonically I can report that we are in prime Ghost Box territory, all woozy synth and plaintive guitar work refracted through that oddly familiar yet strange hauntological prism. It’s easy on the ear but not too easy. As with all effective works within the genre a sense of not quite feeling at home is never really far away.

“The Rituals of Reversal” with its hurdy-gurdy and wind chimes intro, could be the ghost of Moyshe McStiff come to pay a visit until soft synth washes, tabla and chiming acoustic guitars make an appearance taking it firmly into the realms of classic 1970’s ambient soundscapes. It’s a lovely fluffy cloud of a tune that you can luxuriate within for an idle afternoon and definitely a big highlight for me. It’s in the instrumental excursions of "The Apple Tree" that it really comes alive, set free from the prison of words. The brief “Rain for a While” would make the cut on any Advisory Circle release and orbits the listener engagingly with its field recording of birdsong nestled gently in simple and repetitive arpeggios. “Patterns Somewhere” has a real Eno circa “Another Green World” feel to it if pared down to a more light on its feet musical chasis, but it works beautifully and is probably the highlight for me of the songs with vocals found here. “Electric Hintermass” is Delia Derbyshire and John Foxx engaged in a morse-code like conversation of back and forth electronic squiggles that ebb and flow menacingly sending shards of primitive electronic sound through your ears. An electric storm in an underpass perhaps? It’s great whatever the descriptor applied here.

Penultimate track “Uncertain” has a lovely brooding mellotron motif melting into some lovely cello work and acoustic guitar plucking and a great haunting vocal line that combine to offer a great moment on this record. The wordless closer, “Luftglider” decorates the mind with its raindrops of synth notes shining atop those lovely warm blankets of electronic hiss, stabbing bass and ever descending guitar notes – it reminds me oddly of the second side of ‘Closer’ by Joy Division, specifically ‘Decades’ from that esteemed record, with perhaps some mid-period ‘Tin Drum’ era Japan thrown into the mix. A strong note on which to close and definitely the type of effort that makes you want to put the record straight back on again. I suggest you take the time to investigate the strange fruit falling from this apple tree.