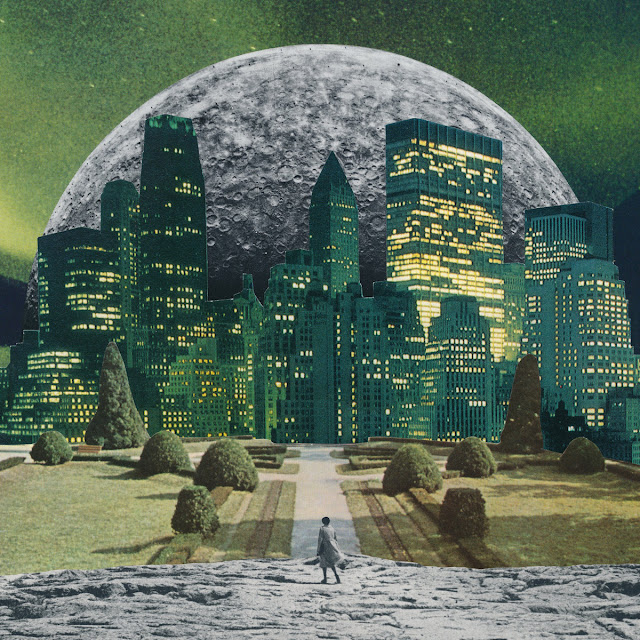 Who remembers me raving about the first Ocean Music LP last year?

That debut was a big, sprawling opus, painted from an expansive sonic palette that gave it a sense of cinematic grandeur. If you haven't checked it out, you should go here immediately and do so.

In the time since its release Ocean Music has evolved from Richard Aufrichtig's solo project to a full band. Given this information, you'd perhaps expect "Songs From The City" to have even more of an epic sweep than its predecessor, but that's certainly not the direction that Aufrichtig has steered this in. This is a much more stark, spare record, although the rich, spacious reverb that cloaked his vocals on the first album is still very much present here. What has changed is the accompaniment, which has been stripped back to a minimalist backbone of skeletal acoustic guitars which makes this a much more intimate, intense experience. Often these sorts of records will leave the listener out in the cold, but Aufrichtig never gives the impression that you're intruding, with even his most personal and heart-felt lyrics having a welcoming, inclusive warmth which communicates their cathartic qualities in a way that ensures it's as therapeutic for the listener as it undoubtedly was for Aufrichtig to record in the first place. This makes it a member of a very small club, spearheaded by Bon Iver's "For Emma, Forever Ago" and the Fleet Foxes self titled debut, and fans of those records will find much to admire here in terms of both directness and sonic architecture.

Aufrichtig's decision to cut "Songs from the City" down to four tracks may initially disappoint those who've been waiting patiently for this to be released, but the more I listen, the more convinced I am that the right decision has been made here; these are songs that shouldn't be hurried, and their quiet intensity would be hard to sustain for any greater length of time, not to mention exhausting for the listener.

If a short, sharp burst of heart-on-sleeve songwriting from a terrific wordsmith is what you're after then you've found your perfect match here. Ocean Music is a treasure, and this is the sort of album I started this website to champion. I'll let the music do the talking from here. Check out the full album stream below.