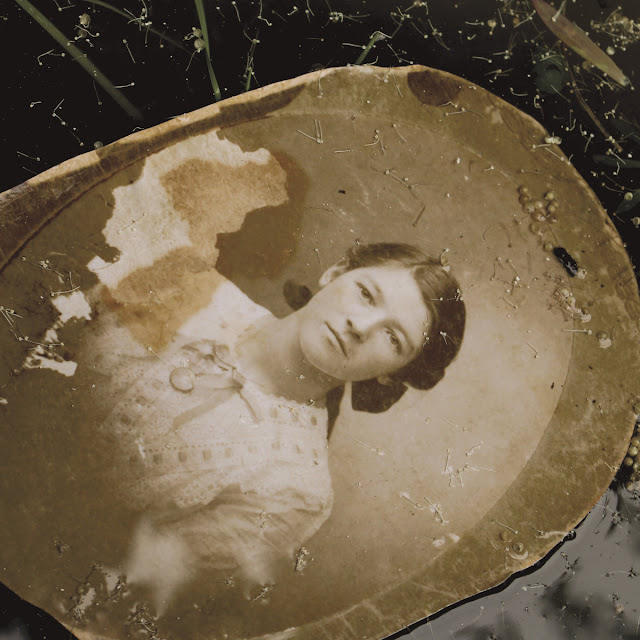 Oliver Cherer is highly prolific, I sort of think of him as a more benevolent ‘Surgeon of Crowthorne’ (aka Dr. William C. Minor 1834 – 1920), despatching odes and sonic letters to the outside world from his half-lit lair by the gently lapping English Channel. In his guise as solo artist he has concocted a rather sinister tincture that when aurally ingested plants the listener firmly in the fly-agaric world woodlands of the South Downs. His new release, “The Myth of Violet Meek”, successfully combines the unsettling and the euphoric in a series of folk-laden lullabies that threaten to overwhelm but ultimately leave enough air-space to allow safe(ish) passage through its rural and occasionally savage path.

So what we have is a self-authored legend charting the life, habits and death of Violet and the impact of her being on those in her immediate surrounds and of the musical curator who feasts upon her existence. The mood is often heavy, with barely suppressed violence and sexual depravity colouring the air amid the scraping of strings and the forthright punctuation of the piano that often surfaces in some benediction of the events that are unfolding and serve as a shell for the listener to make safe travel through. It reminds this author of 70’s acid-folk misfits Comus (‘Who Killed the Bears’) filtered through a more incisive set of songwriting chops that say someone like Luke Haines would display (‘Violet Says’). You could even make an argument for the record in totality being a reworking of Lou Reed’s gothic masterpiece ‘Berlin’ translated to a field in Victorian England.

In any case, all of these comparisons however inaccurately applied tell you a lot about the songwriting chops of Oliver Cherer. He is a classicist composer with genetic mutation whose fusing of musical viewpoints and deployment of light and shade utilising a range of largely acoustic instruments is mightily impressive. Even in the presently overpopulated ‘nu-folk’, ‘alt-folk’, ‘acid folk’, ‘fuzzy felt folk’ genre, ‘The Myth of Violet Meek’ shows the qualities of a thoroughbred in a field of ponies. Listen to the beautiful ghost waltz of ‘Valentine’ as it skips across your mind and entrances you whilst expertly keeping you out of the dance before vanishing into the net curtains of your mind. Or the stately ballad ‘Unspoken’ delivered with all the authority of a walnut grandfather clock chiming out at three. In an empty house. The queasy hurdy gurdy string ensemble of ‘A Bear with Two Backs’, the hobo folk-blues figure of the almost unbearably self-disgustedly frank ‘Slag’.

As always, Oliver Cherer is not a perennial half empty communicator and he is programmed to find some warming resolution to any concept, however heavy it may be. The penultimate, ‘Trees’ is a brilliant anthemically drifting song which appears from behind the dark side of the moon to illuminate the twilight world we have previously dwelled in when hearing of the myth of Violet Meek. Our brains may be damaged but peace can be found in the trees. In the nature from which we sprang and from which we all must return. It’s a celebratory end to a remarkable journey. Almost. For as we draw our curtains and reach for bed the faint rustlings and psaltery of Violet and her sisters lurk just out of sight, beyond the hedgerow. Waiting.

‘The Myth of Violet Meek’ is available on several formats including a lovely white vinyl edition from your local independent stockists or direct from Wayside and Woodland Records.