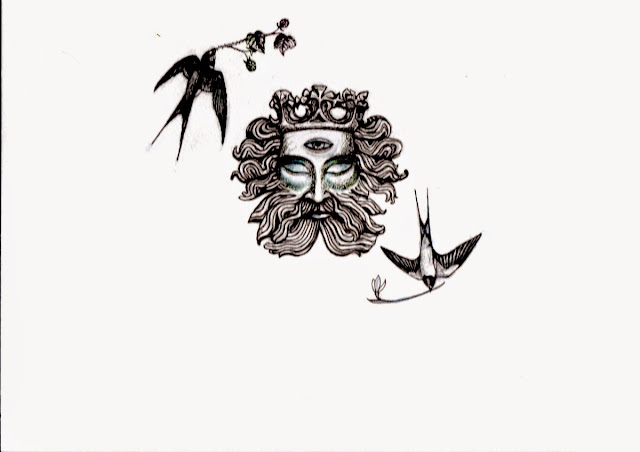 Multi-instrumentalist, painter and composer Richard Moult returns with an album of quiet yet powerfully distilled beauty; it is also something of a departure from recent instrumental releases ‘Aonaran’ and ‘Procyon Amphisbaena Procyon’. Those albums’ rural, melancholy loveliness is still tangibly present yet here is complimented with vocal performances from fellow United Bibles Studies students David Colohan, Amanda Feery, Alison O’Donnell and Áine O'Dwyer with guitar and vocals from Adam Leonard (his solo releases as well as his work with The Owl Service are well worth searching out). Label owner and artist in her own right Delphine Dora also takes a vocal turn, the collection of singers lending the album a narrative voice, a coherence emphasised by the fact that the album (described as a Loegrian dream sequence) is a collection of poems mostly by Mary Webb, but also Ivor Gurney and Gladys Mary Coles, each set to song.

A sombre and stately prologue opens the album, string quartet underpinning tense piano notes and squalls of flute. It is a suitably serious and yet grand beginning to an album that is ornately crafted and filled with utterly gorgeous baroque folksong. 'Green Rain' follows, Adam Leonard’s voice strident and plaintive across layered vocal harmonies, keyboards merging with cello to create an atmosphere with hints of both The Left Banke and the late 90’s output of Current 93. Áine O'Dwyer ably takes up the vocal reigns on 'The Bramble Patch', a heart-breaking tapestry of strings and piano. Her breathtaking harp playing can be heard as the song quietens and begins to retreat, plucked alongside a lone (and lonely) oboe. 'Hour Glass' builds and layers upon itself, piano lines criss crossing and Leonard's voice lending a humble dignity to the ever growing tension and power of the song. 'Halcyon Tales' is a brief interlude of woodwind, the air of composed and refined sadness is almost tangible and welcoming. 'Winter Sunrise' adds a psych sheen, mellotron singing like an angelic choir behind a perfectly composed dramatic harmony that has Delphine Dora and Moult's vocals intertwining and merging, reminding this listener of some of the more melancholic moments of (the 60s) Nirvana and the lush orchestrations of psych singer songwriter Duncan Browne. 'Loss' is a short yet perfectly refined moment of beautiful sadness, strings and keyboards embellishing this crystalline piece of chamber folk. 'On Receiving A Box Of Spring Flowers In London' is heartrendingly good; if you listen to one track to inform you about what this album offers let this be the one. Both Leonard’s and Amanda Moult's vocals are a revelation and the orchestration both weeps and sweeps across the cascading piano lines and Moult's spoken word outro, reciting the different types of flowers contained in said box. Amanda Feery's gentle and ethereal vocals evoke Vashti Bunyan on 'Snowdrop Time' whilst 'Spring In The West' is a dawn laden lament that mixes baroque stylings with some heavily distorted guitar.

Indeed this is an album of sheer loveliness, albeit at times barbed and edgy. 'Swallows' proclaims the coming of dusk, dramatic swoops of violin and Michael Tanner's Ommadawn-era Mike Oldfield style guitar adorning Sophie Cooper's shiver inducing performance. 'To A Blackbird Singing In London' has the instantly recognisable voice of Mellow Candle's Alison O'Donnell dueting and harmonising with Moult himself in a what must count as one of the most perfectly formed songs this listener will probably ever hear. Again the sound of the mellotron sings out against the chamber strings and piano, truly gorgeous and also truly heart-breaking. 'The Sounding Circle' is blessed with David Colohan vocals (Raising Holy Sparks, United Bible Studies) adding an air of dread to a track that already sounds like the day before the end of the world. This album was recorded in the Outer Hebrides and there is distinct sense of the rugged and impassive landscape, something ancient and bleak. 'Epilogue (Mimmering)' is a twilit closer, with shades of the haunted landscape in both the woodwind and piano as they fade into blackness amidst the sound of waves and echoed voices.

With each release Moult seems to accomplish even greater emotional resonance. His work has a timeless and ageless quality; it seems to exist outside of contemporary music and any commercial notions that apply. Instead he appears solely concerned with his own vision, that of making music with meaning, beauty and heart (ache). You would do well to join him and his cohorts here, steeped in a rustic yet ornate orchestration that will transport you from this world for the duration to somewhere wilder, more windswept and in comfortable solitude.

Available below from the wonderful Wild Silence label as a download and as a limited edition CD with fold out sleeve and beautiful artwork. Wild Silence’s releases are always works of art in themselves and this is no exception.